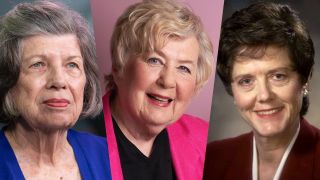 From left to right: JoAnn Hardin Morgan, an aerospace engineer who, after about a decade with NASA, became the only woman working in the firing room during Apollo 11; Frances "Poppy" Northcutt, a trailblazing engineer and "computer" at NASA who, for Apollo 8, served as the first woman in an operation support role in Mission Control; and Carolyn Leach Huntoon, a scientist who directed and conducted medical research at NASA and became the first American woman to serve as director of NASA's Johnson Space Center.
(Image: © Kim Shiflett/NASA; Corey Nickols/Getty; NASA)

Three women who were essential to the moon landing and NASA's Apollo program as a whole chatted with Space.com about discrimination, engineering and our future on Mars.

Last month (Sept. 12) at the Smithsonian National Air and Space Museum in Washington, D.C., three scientists and engineers (and a fourth surprise guest who appeared at the event — Marion Lee Johnson) spoke on a panel at the museum's annual John H. Glenn Lecture in Space History. On the panel, titled "Women of Apollo," they talked about what it was like to work as both women and as key scientists and engineers in the Apollo program.

Before the panel, Space.com had the chance to sit down with the three panelists and ask them a few questions.

On the obvious topic of gender discrimination, the women were clear that, while they were able to achieve incredible things through determination, hard work and long hours, NASA has come a long way since the '60s.

"It was very challenging, it was very exciting but I also experienced a short course in sex discrimination while I was there, OK? A very intense, very, you know, very eye opening experience of sex discrimination and that's why I became very active in working for women's rights," Frances "Poppy" Northcutt, a trailblazing engineer and "computer" at NASA who, for Apollo 8, served as the first woman in an operation support role in Mission Control, said to Space.com in the video.

The panel later in the evening featured Northcutt along with fellow panelists JoAnn Hardin Morgan, an aerospace engineer who, after about a decade with NASA, became the only woman working in the firing room during Apollo 11, and Carolyn Leach Huntoon, a scientist who directed and conducted medical research at NASA and became the first American woman to serve as director of NASA's Johnson Space Center.

At the panel, the women all shared stories about the difficulties of being some of the very few women working in engineering and scientific roles at NASA at the time.

In the interview, they expanded on where we are today compared to the '60s, and how that progress was actually made.

"I've seen a huge change at Kennedy Space Center in Florida where I worked off and on from '58 to 2003, when I retired," Morgan said.

Northcutt and Huntoon noted the marked changes and improvements in how many women both work at NASA and hold more important positions. But, as Northcutt pointed out, this wasn't just a natural progression.

"Most of this didn't happen because people were jumping at the chance of opening up the doors to women," Northcutt said.

"There's some ugly history back in there," she added. "There's the highest-ranking woman at NASA in 1973 [who] was fired for telling the ugly truth about NASA's EEO program being pretty much a total failure. Now, I think that woke a lot of people up, even if they didn't like hearing what they heard, and they started really making efforts to improve the hiring of women and hiring of minority people. But it didn't come just because everybody was enlightened."

And, as the women noted, there is still work to do with regards to women being encouraged and supported to go into fields like engineering.

These three trailblazers aren't focused on the past and their time at NASA during Apollo, however. They are passionate about the future of women in STEM, human spaceflight and Mars.

When asked about where spaceflight will be in another 50 years, and if we'll be on Mars, Morgan said, "I have the real short and simple answer: we are already 10 to 20 years behind. "In 1969, I thought by 2000 we would be on Mars and we would've gone farther."

Northcutt and Huntoon agreed. "Back in 1970 and 1971, by the time we were flying Apollo 13, I was working on some preliminary Mars work," Northcutt said.

"Me too!" Morgan replied.

"I think this, as they said, we are behind where we would all like to be. It has not been a national priority to do this and now it's becoming a national priority," Huntoon said. Huntoon predicted that "we'll be on Mars before 50 years are up."