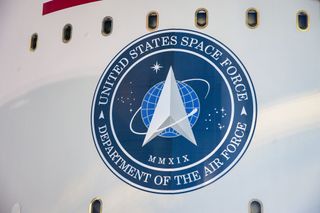 WASHINGTON — The more Americans learn about the U.S. Space Force, the more they'll appreciate it, one of the new military branch's leaders believes.

President Donald Trump established the Space Force on Dec. 20, 2019, as part of the National Defense Authorization Act. Since then, the new military branch has been met with not just confusion but sometimes open mockery.

U.S. Air Force Lt. Gen. David Thompson, who also serves as vice commander of the Space Force, wants to counter any misunderstandings about the purpose of the new organization.

The nation needs a Space Force because so much of our day-to-day lives depends on operations in space, Thompson said, citing the GPS satellites that help us navigate and the satellites that provide us internet service. In order to operate in space "for the nation, for national security, for our forces and perhaps ultimately for civil and economic benefit, we now have to be prepared to do that in the face of threats," he said during the Satellite 2020 conference here earlier this month.

World War II sent combat truly skyward. Over the course of the war, more than 100,000 planes were built, and millions of people enlisted in the armed forces. Americans back then "innately understood what [airplane] power meant to the security of a nation," Thompson said.

In 1947, just after the war ended, the United States established the Air Force as a separate military branch.

There might have been specific questions about the role of airplanes, "but nobody really asked, 'Hey, this Air Force thing, what is it? What do they do? Why in the world do we need airplanes anyway?'" Thompson said.

The same logic should apply to the Space Force, he added.

"You know, we talk about the North Koreans launching suspicious objects in the Korean Peninsula," the lieutenant general said. "The fact that we can provide warning to people that they are coming. People certainly understand that happens, but nobody stops to think, 'Wait; how do we do this?'"

Today, he said, "not enough people innately understand what we already do in space in a military sense." For example, satellites help military vehicles navigate the air and sea. They also help make sure weapons are used correctly and land precisely where they're supposed to, Thompson said.

He also lauded what he called "a burgeoning and blossoming commercial space sector."

Defense needs used to drive technology development; after all, NASA was established as a direct reaction to World War II and the pressures of the Cold War, which was pushing nations to compete over access to space. But about 15 years ago, Thompson said, a switch flipped, and now the commercial sector is developing technologies that the national defense world is paying closing attention to.

"We've now gotten to the point where that ingenuity, that investment, and the applications that have come as a result of that far outstrip anything we ever really thought about in the sense of using it for defense purposes," he said.