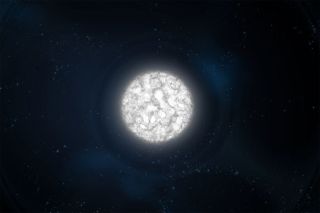 Billions of years from now, when the sun is in its final throes of death (that is, after it has already vaporized Earth), its helium core will collapse in on itself, shriveling into a tightly compressed ball of glowing gas called a white dwarf.

But while these stellar tombstones already dot our galactic landscape, their interiors remain a puzzle in physics — which is no surprise, given how strange they are.

Recently, a pair of researchers has created a sophisticated model to "look at" a white dwarf's insides. And guess what? These cosmic oddballs could put Earthly truffles to shame, as they seem to have creamy centers chock-full of exotic quantum liquids.

Stars like our sun get their energy by fusing hydrogen into helium deep in their cores. This energy making can't last forever — eventually, the available hydrogen runs out and the party stops. But near the end of their lives, stars can briefly turn the lights back on by burning helium, leaving behind an inert, dead core of carbon and oxygen.

But smallish stars like our sun don't have enough gravitational oomph to fuse carbon and oxygen into any heavier elements like magnesium or iron, and so they die, turning themselves inside out and releasing their atmospheres into a beautiful (or gory, depending on your point of view) planetary nebula.

That core of carbon and oxygen remains behind, a significant fraction of the star's mass locked inside a core no bigger than Earth. When astronomers first discovered these strange objects — now known as white dwarfs — they thought they were impossible, with calculated densities soaring above a billion times that of the air we breathe. How could something have such extreme density and not simply collapse under its own terrible weight?

But white dwarfs are not impossible, and theoretical insights in the early 20th century solved the mystery of how white dwarfs could possibly exist. The answer came in the form of quantum mechanics, and the realization that at high densities, nature is, to put it simply, very weird. In the case of white dwarfs, only a certain number of electrons can be packed inside. Since these spinning electrons repel each other, together they create enough pressure to keep the dead stars ballooned up, withstanding even the almost overwhelming forces of gravity.

And so stellar corpses can live on for trillions of years.

While these early calculations showed how white dwarfs could exist in our universe, astrophysicists knew that simple descriptions wouldn't fully capture what's happening in such exotic cores. After all, this is a state of matter that is completely inaccessible to laboratories and experiments here on Earth — who knows what strange games nature might get up to, deep inside these dead hearts?

Related: The 12 Strangest Objects in the Universe

Physicists and astronomers alike have been wondering about the interiors of white dwarfs for decades now, and in a recent paper appearing on the preprint journal arXiv, a pair of Russian theoretical physicists has proposed a new model of the deep cores in white dwarfs, detailing how their model builds upon and deviates from earlier work, and how observers can potentially tell if their new model is accurate.

In this new model, the scientists simulated the core of the white dwarf as made up of only one kind of heavy charged nuclei (this isn't entirely accurate, as white dwarfs are a mixture of several elements like carbon and oxygen, but it's a good enough starting point), with these particles immersed in a thick soup of electrons.

This setup assumes that white dwarfs are warm enough to have liquid interiors, which is a reasonable assumption, given that when they're born (or rather, when they're finally exposed after the deaths of their host stars), they have temperatures well in excess of a million degrees kelvins.

The outermost layers of a white dwarf are exposed to the frigid environment of a pure vacuum, allowing hydrogen to settle onto the surface, giving them a light, thin atmosphere. And over extreme times, white dwarfs do cool down, eventually forming a giant crystal, but that's long enough away that for the most part, white dwarfs are filled with an exotic quantum liquid of carbon and oxygen, so the model used in this study is relatively accurate for a large fraction of a white dwarf's lifetime.

Since white-dwarf guts represent one of the most unusual environments in the universe, studying them could reveal some deep properties of quantum mechanics in extreme conditions. But since scientists can never hope to rope in a nearby white dwarf to bring it in for a vivisection, how can we possibly get a look under the hood?

The researchers of the new model showed how the light given off by white dwarfs can be different heat. White dwarfs don't generate heat on their own; their intense temperatures are the result of the extreme gravitational pressures they faced when they were inside stars. But once their host star blows away and they're exposed to space, they glow intensely — in the first few thousand years after their big reveal, they're so hot they emit X-ray radiation.

But cool down they do, ever so slowly, leaking away their heat as radiation into space. And we've been watching white dwarfs for long enough that we can see them cool off over the course of years and decades. How quickly they cool off depends on how efficiently their trapped heat can escape to their surfaces — which in turn depends on the exact nature of their guts.

Another feature the researchers showed could be used to probe inside white dwarfs is their ever-so-slight wobble. Akin to the way seismography is used to study the core of Earth, the makeup and character of a white dwarf changes how vibrations will display themselves on the surface.

In particular, the new research suggests that most white dwarfs should cool down faster than we used to think, vibrate slightly less often than older models suggest and be slightly bigger than expected than if we didn't take into account this more realistic model. Now it's up to the astronomers to make precise enough measurements to see if we're really understanding these exotic environments, or if we need to take another crack at it.