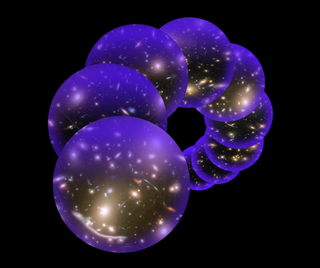 Each of the different universes followed different theories for galaxy formation.
(Image: © NASA, ESA, and J. Lotz and the HFF Team/STScI)

Observing the universe through telescopes can provide some clues as to how galaxies came to be, but looking at millions of virtual universes on a supercomputer gave scientists more insight into galaxy formation and the role that dark matter plays in it.

A team of scientists from the University of Arizona generated millions of universe simulations, each following a different theory of galaxy formation. Every simulated universe contained 12 million galaxies that formed between 400 million years after the Big Bang and the present day.

"We compiled 20 years of astronomical observations," Peter Behroozi, assistant professor at the University of Arizona's Department of Astronomy, who led the study, told Space.com. "That gave us a lot of information about the universe — how many galaxies are there, how fast do they seem to be growing, and are a lot of them close together in one part of the sky or are they randomly distributed."

The results from the "virtual universe machines" revealed something surprising about star formation. Scientists had commonly believed that star formation was less efficient in the early universe, with the energy emitted by black holes and supernova explosions thought to stifle the birth of new stars in galaxies.

However, the recent study showed that star formation may have been more efficient in the early universe, suggesting that black holes and dying stars play a smaller role in preventing star formation.

"All previous simulations seemed to point that galaxies don't form stars so easily in the early universe," Behroozi said. "But we found the opposite, that star formation was more efficient as we went back in the early history of the universe."

In the young universe, the supermassive black holes found in the center of most galaxies emitted large amounts of energy as they fed off surrounding matter. This prevented gas from cooling down and collapsing into the dense pockets that give birth to stars. Additionally, radiation emitted by supernova explosions from dying stars would prevent the gas from cooling down — as would dark matter, which was denser in early cosmic history and would keep the gas at high temperatures.

"When the galaxy stops forming stars … the color of the galaxy will change from blue to red," Behroozi said. That's because such galaxies will contain fewer luminous, blue stars, which usually die out sooner, but will have more aging, red stars.

"If galaxies behaved as we thought and stopped forming stars earlier, our actual universe would be colored all wrong," Behroozi added.

Behroozi and his team said they plan on using the virtual universe machine, which took a decade to create, to look at how the shapes of galaxies evolved over time.

The study was published Aug. 9 in the Monthly Notices of the Royal Astronomical Society journal.