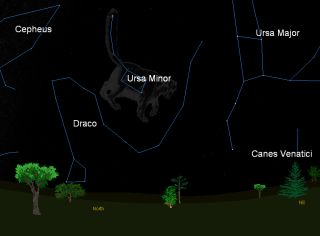 This sky map shows the location of the constellation Ursa Minor (Little Bear), the star pattern from which the annual Ursid meteor shower appears to radiate from.
(Image: © Starry Night Software)

The Ursid meteor shower is an often overlooked heavenly phenomenon occurring each year in late December around the winter solstice. While generally not as flashy as other annual meteor shower events, the low-key Ursids can nevertheless provide a delightful experience for skywatching enthusiasts.

Streaking, falling stars are created when small space rocks enter Earth’s atmosphere and burn up, according to NASA. At least one meteor can often be seen on any given night, especially when far from light pollution, but sky watchers get excited for certain dazzling celestial light shows that occur regularly throughout the year.

Annual meteor showers — in which dozens or even hundreds of meteors can be seen per hour — happen when our planet’s orbit takes it through the debris field left behind by a comet as it travels around the sun. As the Earth plows through these icy fragments, they fall into our atmosphere and generate beautiful shooting stars that seem to originate from the same point in the sky.

The summer Perseids, which emerge from the constellation Perseus in late July and early August, are a popular show as the warm nights at that time make for comfortable viewing conditions. And the spectacular mid-December Geminids, the byproduct of an asteroid named Phaethon that can generate up to 140 meteors per hour, are usually the highlight of the meteor shower calendar.

The Ursids, in contrast, are a more sedate affair, usually producing five to 10 meteors per hour. In rare cases in the past, such as in 1945 and 1986, the event has generated as much as 50 meteors per hour over the course of the night.

We have the dim comet 8P/Tuttle, discovered in 1790, to thank for the Ursids. It goes around the sun every 13.6 years and provides the debris field that creates the meteor shower. The Ursids were first recorded in England in 1900 and also spotted in Germany in the following decades.

How to watch the Ursid meteor shower

Usually most active between December 19 to 24, the Ursids don't often get a lot of attention because of holiday festivities and the cold winter nights, according to the American Meteor Society. But for some viewers, the Ursid meteor shower provides a welcome distraction and a chance to contemplate the night sky.

Viewing the Ursids requires little more than good eyesight and some patience. The faint shower is best seen around its peak by getting as far from city lights as possible.

Related: The 9 most brilliant comets ever seen

To spot the Ursids, first locate the constellation Ursa Minor, the Little Bear that also contains the Little Dipper. The very recognizable Big Dipper points directly to the Little Dipper. Simply make a line from the outer two stars of the Big Dipper’s bowl and arc upward; the first bright star you hit will be Polaris, the North Star.

Polaris is the tail of the Little Dipper’s handle. The ladle-shaped constellation has two stars at the outer end of its bowl named Pherkad and Kochab. The brighter Kochab is the origin point for the Ursid meteor shower.

For viewers in the Northern Hemisphere, Kochab's position so near to the north pole of the sky means that the star almost never sets. Unfortunately the meteor shower is not visible in the Southern Hemisphere.

The Ursids should peak around Dec. 21 in 2020. You can use the website Time and Date to look up the best viewing times in your area.