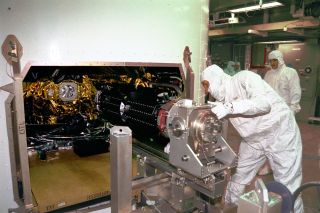 Engineers install one of the three radioisotope thermoelectric generators (RTGs) on NASA's Cassini spacecraft, which orbited Saturn from 2004 to 2017.
(Image: © NASA)

The United States has set new guidelines for launching safe and sustainable nuclear spacecraft on future missions to the moon, Mars and beyond.

On Tuesday (Aug. 20), President Donald Trump signed a memorandum outlining new procedures for launching nuclear-powered systems into space. The guidelines include a thorough safety analysis and launch processes for both government and commercial launches.

Space nuclear systems include radioisotope power systems, such as radioisotope thermoelectric generators (RTGs), which are in widespread use on spacecraft today. The memorandum also covers potential future systems such as nuclear thermal propulsion, which would harness the heat thrown off by fission reactions to accelerate propellants to very high speeds.

NASA is keenly interested in nuclear thermal propulsion. The technology could greatly reduce travel time for crewed missions to Mars and could have a host of other space applications as well, agency chief Jim Bridenstine said yesterday at the sixth meeting of the National Space Council.

"The ability to use space nuclear systems safely and sustainably is vital to maintaining and advancing United States dominance and strategic leadership in space," the memorandum said.

Trump's memo follows an Aug. 8 explosion in Russia that released nuclear material. The accident occurred at a military test site outside Severodvinsk and is believed to have caused a spike in radiation across the city, as well as the deaths of five nuclear scientists and two military personnel. U.S. officials believe the blast was related to the development of a nuclear-powered missile, The New York Times reported.

The safety guidelines outlined in the memorandum address radiation exposure and set strict public standards. In addition, the memo says that NASA must create an Interagency Nuclear Safety Review Board (INSRB) consisting of representatives from the departments of State, Defense, Energy and Transportation, as well as the Environmental Protection Agency, NASA and the Nuclear Regulatory Commission. The purpose of the INSRB will be to ensure the safe and effective use of space nuclear systems.