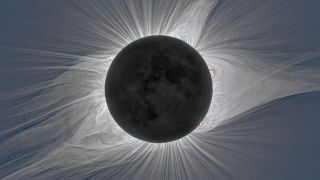 In South America, millions of eyes will turn  to the skies as the moon moves in front of the sun to present a solar eclipse today (July 2). While nearly the entire continent will see the moon cover at least a portion of the sun, skywatchers in parts of Chile and Argentina will experience a few moments of daytime twilight as the moon completely blots out the sun in a total solar eclipse.

But while most skywatchers will soak in the awe-inspiring sight, some will turn a more critical, scientific eye to the event. The eclipse will take place over the National Science Foundation's (NSF) Cerro Tololo Inter-American Observatory in northern Chile, where five teams of scientists will study the atmosphere of the sun and Earth during the eclipse to obtain hard-to-glimpse observations only available in the fleeting moments of daylight darkness.

"On July 2, NSF funding will enable scientists to seize the precious opportunity of a total solar eclipse to study the sun's corona," NSF Program Director David Boboltz said in a statement. The sun will remain hidden for 2 minutes and 6 seconds at the telescope.

Made up of extremely hot gases, the corona is mysteriously hotter than the surface of the sun. Despite its high temperature, it is millions of times dimmer than the visible body of the sun, due to its tenuous nature. Studying the corona can reveal insights about the space weather generated by the sun, which can have significant effects on Earth.

In addition to performing valuable science, each team has outlined an eclipse outreach plan to involve local Chilean and foreign students, amateur astronomers, and the general public.

In the 1990s, the American astronomer Jay Pasachoff began an observing program that has since continued to monitor the changing sun. By measuring the corona's current color, shape, and temperature, the scientists hope to improve their understanding of the eruptions and streamers that come from the sun.

"Each glimpse we get of the sun during a total solar eclipse — only a couple of minutes every 18 months or so — gives us a different set of features to look at," Pasachoff said in the statement.

Observations of the sun's features can help improve our understanding of coronal mass ejections (CMEs), eruptions of charged material spewing from the solar surface. As these clumps travel outward in space, they can collide with planets like Earth and interact with their magnetic fields. In 1859, a solar superstorm known as the Carrington event caused electrical shocks and shorts along telegraph wires, even allowing telegraphs disconnected from their power supply to work. A similar event today, in a far more electronic world, could have significant repercussions.

Pasachoff's team will also study large coronal structures known as streamers, the pointy regions that appear in most images of the corona. Because the 2019 total solar eclipse occurs during a relatively quiet part of the sun's 11-year cycle of activity, it will provide a rare view of solar polar plumes, the tufts of open magnetic fields produced at the solar north and south poles.

"I’m also looking forward to comparing our observations of the corona taken during the eclipse ... with predictions that colleagues make before the eclipse based on the Sun’s magnetic field and sunspots over the preceding month," said Pasachoff. The predictions and observations will be combined in computer images once the eclipse has concluded.

The sun's temperature also changes over the 11-year cycle. By measuring superheated iron in the corona, the team will be able to measure the overall temperature of the corona to study how it has varied over time.

A second team of researchers known as the "Solar Wind Sherpas" will study the sun's corona from three different locations across South America. Led by astronomer Shadia Habbal of the University of Hawai'i, this group will study the sun from Cerro Tololo and two other locations in Argentina. In addition to increasing the chances of being able to observe the sun in clear weather, having multiple sites will also allow the researchers to measure changes in coronal structure that happen over very small timescales.

The plan isn't new. Habbai's team used a similar strategy during the Aug. 21, 2017 total solar eclipse over the United States. Their goal is to increase the suite of instruments used in the observations, and to study different wavelengths that have not yet been studied.

The astronomers plan to use multi-wavelength imaging and spectroscopic measurements, which break the light into its component wavelengths, to detect the chemical composition, temperature, density, motion not related to heat, and outflows of different parts of the corona. Each attribute will be studied near the solar surface, where the largest change in the solar magnetic field occurs and where solar wind and coronal mass ejections are born and flung from the sun.

Habbal said the eclipse is unique "because it occurs late in the afternoon and the sun will be at very low altitude. Also, the sun is close to solar minimum, so the distribution of structures in the solar corona will be different from two years ago."

'A great achievement for citizen science'

Astronomers from the National Astronomical Observatory of Japan will also set up multiple stations to study the eclipse. Yoichiro Hanaoka's team will perform observations of the corona close to the surface, a region not visible to space-based observatories like NASA's Solar and Heliospheric Observatory (SOHO) and Solar Terrestrial Relations Observatory (STEREO). By combining the ground-based images with those obtained from space, Hanaoka and his colleagues will be able to construct a complete image of the corona.

"We are going to collaborate with amateur observers, widely spread along the total eclipse path in Chile and Argentina, to organize multi-site observations," he said. Combining all of these observations will provide a glimpse at how the corona changes over time. "It will be a great achievement for citizen science," Hanaoka said.

To measure the sun's magnetic field, scientists have to measure the polarization of the light coming from the sun. Like polarized sunglasses, the polarizers on solar telescopes filters the light that doesn't match their orientation.

"By rotating these polarizers, we can piece together the shape of the magnetic field on the sun," says Paul Bryans, a researcher at the University Corporation for Atmospheric Research who will lead the project to study the sun's magnetic field. "This will help us understand what types of magnetic field configurations can lead to eruptive events," he said.

While the first four NSF teams will turn their eyes to the sun, the fifth will keep the view firmly on Earth. Led by Miquel Serra-Ricart, a researcher at the Instituto de Astrofísica de Canarias (IAC) in Spain, the team will investigate changes in the temperature of the Earth's atmosphere, particularly the ionosphere — the upper layer that lies about 50 to 600 miles (80 to 1,000 kilometers) above the Earth's surface — as the moon's shadow travels over the observatory.

"A total solar eclipse produces a broad, round area of darkness and greatly reduced sunlight that travels across Earth's atmosphere in a relatively narrow path during the daytime," Serra-Ricart said. "Its effect on solar radiation intensity is remarkably similar to what happens at sunrise and sunset and it creates changes in the Earth’s atmosphere we want to measure."

The team will track how much and how quickly the temperature drops in the shadow when the Earth is completely covered by the sun. They will also track changes in the ionosphere to better understand how it impacts nighttime long-distance radio reception.

Although the moon's shadow will produce a brief nighttime-like ionosphere, it will differ from the ordinary evening atmosphere.

"The moon’s shadow is relatively small on the Earth and travels at supersonic speeds. It will likely produce some interesting effects that might be detectable on ordinary radios or small receivers," said Serra-Ricart.

This won't be the first time the ionosphere has been studied during an eclipse. During the 1999 eclipse over the United Kingdom, scientists encouraged people to use a radio to track the changes in the upper atmosphere. Citizen scientists tuned into a radio station in Spain detectable in the UK to determine how much farther the radio waves traveled during the eclipse.

"Although the ionospheric effects of solar eclipses have been studied for over 50 years many unanswered questions remain. We know roughly how this happens, but not precisely. The eclipse will give researchers a chance to examine the charging and uncharging process in almost real time."

Editor's Note: If you snap an amazing picture of the July 2, 2019 total solar eclipse and would like to share it with Space.com's readers, send your photos, comments, and your name and location to spacephotos@space.com.