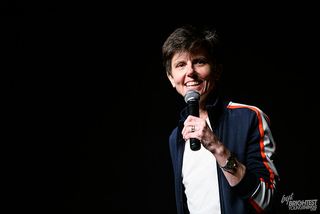 Beloved stand-up comedian and "Star Trek: Discovery" actor Tig Notaro is proud to be in the Trek universe, but isn't so sure she'd fly to space herself.

Notaro recently took some time to chat with Space.com during the weekend of the Bentzen Ball, an annual comedy festival in Washington, D.C., that she curates and performs at. During the conversation, Notaro revealed her feelings regarding human spaceflight, the importance of diversity and representation, and what it feels like to become a part of the "Star Trek" universe.

Notaro has recently played chief engineer Reno in "Star Trek: Discovery" and an astronaut in the film "Lucy in the Sky." She also recently made waves in the space world as she joined forces with NASA's James Webb Space Telescope on Twitter.

Welcome to the Trek universe

"It's not anything that I chose," Notaro said about her work in sci-fi with roles in both Trek and "Lucy in the Sky." But, while she noted that she wasn't seeking out sci-fi acting gigs, "I feel open to that world," the actor said.

"It's very different," Notaro added — as a person who works primarily as a stand-up comic — about her foray into science fiction. But, while it's different, "I like it, I like being a recurring role on "Star Trek" … I'm not looking to become a full cast member but I enjoy the world, and I enjoy the cast and crew, and I think what I have going on is kind of perfect."

Now, while Notaro might be a relatively new face in the sci-fi world, "I did follow 'Star Trek' when I was a child, the original series … obviously I'm more familiar with Discovery now, but I love being a part of it, if just simply for the ability to tell people I am on 'Star Trek,' it's really fun to be able to say that."

"It's fun, I'm proud to be a part of it," she added. "My sons, they think I actually work in space because whenever I go off to Toronto to film 'Star Trek,' I always tell them I have to go work on the space rocket "

Notaro, unsurprisingly, had a few funny words to say about her other recent sci-fi work in "Lucy in the Sky." According to Notaro, the film's director Noah Hawley liked her stand-up work and reached out, then joked that he thought, "she could probably act like herself in this too." She added that she received a nice surprise after filming, when the "Lucy in the Sky" team gave her the on-screen spacesuit that she wore in the movie.

While Notaro has recently played characters who either travel to space ("Lucy in the Sky") or spend their lives working in space ("Star Trek: Discovery"), she's not sure she would launch into space herself.

"I think it's really exciting and terrifying," she said. "If I could be in space, I would like to just be teleported; I don't know that I would want that actually takeoff and journey to outer space."

"I was just talking to my wife about that; she has absolutely no interest in being in outer space. I don't think were gonna run into 'should we go, should we not go?'" Notaro said, adding that, while her wife isn't interested, her sons would probably want to go. "I would bring my sons. I really think they would be interested."

Notaro, as a gay woman leading in stand-up comedy, is no stranger to providing representation for marginalized groups in spaces typically dominated by straight men.

On the topic of representation and diversity in Trek, Notaro noted that "It's really impressive, 'Star Trek' was already so ahead of its time with diversity and representation, but that's, I think, another part of what makes me proud to be a part of that show," she said. "It's really thoughtful … it's just a smart, thoughtful show and it's nice to be a part of something that's positive. It's not just some random space series or sci-fi project. It's a really smart, thoughtful, diverse series."

"I'm certainly in ridiculous things, like my own nonsense talk show, but the other projects that I do, it is nice to have that anchor of pride with something. And I think it's tremendously important to have the representation that they do and the diversity." Notaro added.

This past year, NASA astronaut Anne McClain became the first active astronaut to be out as part of the LGBTQ+ community, astronauts Jessica Meir and Christina Koch completed the first all-woman spacewalk, and NASA, with their Artemis program, has increased its efforts to land the first woman on the moon.

So, while Notaro is very familiar with the world of comedy, and now sci-fi, she also spoke about the importance of increasing diversity and representation in other sectors, like the world of real human spaceflight. As she described, it is extremely important "to kind of make sure that people and especially younger generations know that it's possible to do what you think is not possible."

Notaro, who was born in Mississippi, grew up largely before such representation was mainstream. "As a kid, when you don't have that, you just kinda skim past it and and you do feel like 'oh that's not for me' or 'I don't have that opportunity.' And then when you do see somebody, how invigorating it is and all the possibilities that start coming to light. I know it's kind of an obvious thing, but it's really really powerful."