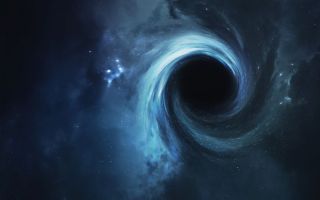 An artist's impression of a black hole. In a new study, scientists identify a black hole in a non-interacting binary with a star, a discovery that could support future black hole findings.
(Image: © Shutterstock)

Researchers have discovered a strange black hole-star pair, a finding that could open our eyes to millions of new black holes that, until now, have been hidden in the cosmos.

For years, scientists have assumed that there are millions of black holes in our galaxy. However, researchers can often only spot black holes that are in binary pairs with stars in which the black hole orbits and siphons matter from the star. This is because, when black holes accrete matter from their partner star, they emit bright, easy-to-spot X-rays.

But many black holes in these pairings don't orbit their star close enough to accrete mass and emit this bright signal, so they go undetected.

However, in a new study, scientists demonstrated how dimmer black holes can be spotted in the night sky.

In the study, scientists looked at a binary star system made up of the giant star 2MASS J05215658+4359220 and a companion, which, through a unique approach, they found is likely a low-mass black hole, lead author Todd Thompson, a professor in the Department of Astronomy at The Ohio State University, told Space.com.

Black hole in a haystack

To spot this dim, low-mass black hole, the research team "had to develop a new type of search," Thompson said. Spotting the elusive black hole was a "needle-in-the-haystack kind of search," he added.

The team combined data on stars exhibiting doppler shift with data from the All-Sky Automated Survey for Supernovae (ASAS-SN) project, in which robotic telescopes worldwide monitor the night sky and collect data on millions of stars. With this data, scientists can see the brightness of stars over time.

The researchers whittled down the list of stars to those "that showed the most extreme doppler shift, Thompson said. They then looked at the stars' light curves, or how the brightness of those stars changed over time in the ASAS-SN data.

The "combination of those two factors led us to this one particular star, this giant star in the outer galaxy," Thompson said about 2MASS J05215658+4359220.

The star's brightness kept changing, brightening and dimming back and forth. The team assumed, and later confirmed, that the brightness variations were in line with the orbital period of an object orbiting the star, Thompson said.

When they studied the system further, the researchers determined that the object must have a mass of around 3.3 solar masses (though they did give a fairly wide margin of error, from 2.6 to 6.1 solar masses). This mass is consistent with a low-mass black hole.

Identifying this black hole which, because it doesn't emit bright X-rays, had previously escaped detection by astronomers, is an important step forward in allowing researchers to more easily identify these "hidden" black holes, Thompson said.

What's more, if this object is found to have the lowest mass deemed possible in its margin or error, it could turn out to be a neutron star — the collapsed core of a giant, dead star — at its maximum mass, Thompson said. Alternatively, if this object is closer to the upper range of its estimated mass, it would add to the definition of what qualifies as a black hole.

If 3.3 solar masses holds up, it's going to be "quite important," Thompson said, adding that it "will show us that these types of black holes are out there."

In other words, if the black hole is, in fact, 3.3 solar masses as these researchers think it likely is, it will provide evidence for the assumption that there are possibly plenty of black holes in the cosmos that don't emit X-rays.

"This was our first candidate," Thompson said, adding that the team is "working on trying to find new candidates using the same search method."

The work was published today (Oct. 31) in the journal Science.