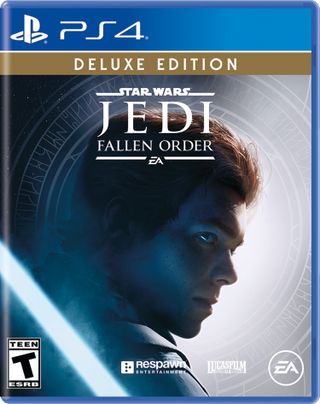 Star Wars Jedi: Fallen Order is now on sale for Cyber Monday for both PS4 and the Xbox One!
(Image: © EA)

Have you ever wanted to be a Jedi? Well, now with EA's new game "Star Wars Jedi: Fallen Order," which you can get on sale for Cyber Monday right now, you can live out your padawan dreams.

The deluxe edition of the game, which was developed by Respawn Entertainment and published by Electronic Arts (EA), is available from Walmart now for just $49.99 ($20 off the typical $69.99 retail price), which is even cheaper than the standard edition of the game. You can get the game for either PS4 or the Xbox One.

This new game from EA is available on both PS4 and the Xbox One, but it's running out fast! View Deal

The deluxe version of Star Wars Jedi: Fallen Order, a single-player, story-driven action adventure game in which you play as Cal Kestis, one of the last surviving Jedi, comes complete with Crimson skins for Cal, Cal's droid companion BD-1 and Cal's ship The Mantis and an exclusive digital art book.

The digital art book gives fans of "Star War" an inside look at the different worlds, lands and characters that you explore (as Cal) in this new game.

Star Wars Jedi: Fallen Order, which was initially released on Nov. 15, is already beloved by both gamers and avid "Star Wars" fans. While battle royale games like Fortnite and games featuring "live services" have seemingly dominated the market in recent years, this game is already taking over. In fact, while this deluxe edition is available on PS4 and Xbox, the game is actually EA's fastest-selling "Star Wars" game for PC.

With public support and glowing impressions from video game reviewers like Jim Sterling, it's clear that people are thrilled to wield a lightsaber and explore the "Star Wars" universe as Cal Kestis.

In the game, you can expect to not only battle opponents with your swift lightsaber technique, but you will also be able to explore ancient forests and haunted jungles while working to rebuild the Jedi order.

If you're in search of other good "Star Wars" deals, check out a roundup of some of Space.com's favorites below.

Amazon has Force-pushed down the price of Kylo Ren's Black Series lightsaber, which normally is set at $300, for this Star Wars deal. Tap into your inner Knight of Ren with Kylo's weapon of choice, featuring sound effects from the "Star Wars" films, a metal hilt and a display stand for when you're not hunting down the Resistance. View Deal

Amazon has slashed its price for this game by 48%! Celebrate your love of "Star Wars" with your family and friends with this "out of this world" board game. In this game,  you have to save the galaxy from the evil Empire and you can play as Luke, Leia, Han, Chewbacca, R2-D2 or C-3PO.View Deal

Harnessing the power of your smartphone, "Jedi Challenges" uses augmented reality to help you to become a Jedi. Using your phone together with the headset, you can compete in lightsaber battles, play holochess and practice combat in the "Star Wars" universe.
View Deal