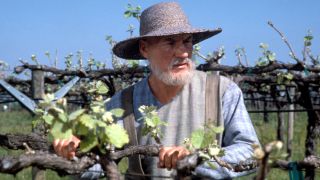 Actor Patrick Stewart (as Captain Jean-Luc Picard) in a scene from an episode of the television series 'Star Trek: The Next Generation' entitled 'All Good Things..., Part I,' California, May 23, 1994.
(Image: © CBS Photo Archive/Getty)

Calling all wine-loving Trekkies, Wines That Rock has released a special line of vintage, perfectly themed "Star Trek" wines that are sure to taste better than synthehol.

The collection includes wines inspired by the "Star Trek" universe and features a cabernet sauvignon and merlot blend from Bordeaux, France, inspired by "Star Trek: The Next Generation" Capt. Jean-Luc Picard, played by Patrick Stewart. Picard's family vineyard is located in the La Barre region of France, according to Trek canon.

But while Picard's family is fictionally rooted in La Barre, there is a real-life vineyard in Bordeaux, France, which goes by the name Château Picard. Interestingly, this vineyard has no relation to the fictional captain and existed long before "Star Trek" ever aired.

Related: The First Trailer for 'Star Trek: Picard' Is Here

Wines that Rock worked with the "Star Trek" production team and paired up with Château Picard to create a Capt. Picard-inspired wine, the 2016 Château Picard Bordeaux, for this collection. This wine is "subtly smoky and spicy, with a bright, fresh, clean-tasting style," startrek.com said.

These notes seem to reflect Picard himself, but you can decide for yourself if the fresh and smoky wine emanates the captain's signature charm. The Picard-inspired wine is packed with attention to detail; the bottle features Picard's family vineyard label, which can be seen in the first teaser for "Star Trek: Picard," which is expected to air on CBS All Access by early 2020.

Wines that Rock has also debuted a second Trek wine: the 2017 United Federation of Planets Special Reserve. A zinfandel, this wine blends in petite sirah and syrah and comes from the Dry Creek and Russian River valleys in Sonoma County, California.

This wine "boasts aromatics of concentrated strawberry, blackberry and plum preserves with a chewy-layered midpalate filled with hints of white peppercorn [and] sweet red and black fruit," startrek.com said. Wines that Rock's website for the collection, "Star Trek" Wines, also describes the wine as having a "velvety mouthfeel."

The company is also selling 1,701 limited-edition collector packs that will include the 2016 Château Picard Bordeaux and the 2017 United Federation of Planets Special Reserve together and will be labeled 1-1,701. Don't expect your wine to arrive tomorrow, however. Due to high summer temperatures, wines purchased will not arrive until mid to late September, the company's website states.

"Our goal has been to produce small-batch, limited-edition, collectible wines that we as fans want to own. This is what we are all about: creating a product that is authentic, fun and connects with fans," Howard Jackowitz, co-founder of Wines That Rock, said to startrek.com.