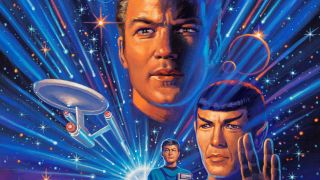 "A longtime collector of pop culture from New York state" ponied up the funds for the Greg Hildebrandt art, which graced the debut issue of "Star Trek: Year Five" #1, Heritage Auctions spokesperson Eric Bradley said in an email to Space.com.

The piece features an image of Capt. James T. Kirk beside representations of his ship (the USS Enterprise) and various planets. Below him are large images of Spock and Dr. McCoy, and then several other smaller pictures of the rest of the "Star Trek" crew.

"Star Trek: Year Five" is released by IDW Publishing and will have several creators working on the first story arc, which the company says explores "a hidden chapter of Enterprise history." The 38 by 28-inch (96 by 71 centimeters) piece by Hildebrandt was expected to sell for between $10,000 to $15,000. (No word on its value in Federation credits.)

Take a look at some of the items auctioned below: