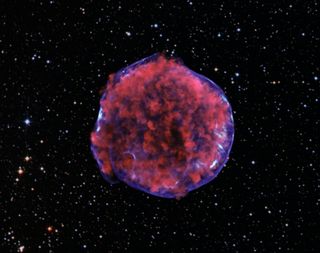 The secret hearts of exploding stars are being dragged out into the light.

Type IA supernovae, which occur when superdense stellar corpses known as white dwarfs go boom after siphoning material from a companion star, are some of the most dramatic events in the universe.

These explosions are incredibly important to astronomers as well; because they feature a relatively fixed inherent luminosity, scientists use Type IA supernovae as "standard candles" to determine cosmic distances.

Indeed, two decades ago, observations of Type IA supernovae revealed that the universe's expansion is accelerating, a surprising find that earned three researchers the 2011 Nobel Prize in Physics and led to the postulation of a mysterious repulsive force called dark energy.

But such work has used Type IA supernovae as tools. Delving into the inner workings of these deep-space blasts has proved more difficult.

"Ironically, given that wealth of observational data, we don't understand how they work," said Alexei Poludnenko, an associate professor of mechanical engineering at the University of Connecticut, told Space.com. "And the theorists sort of have stagnated over the past couple of decades."

Part of the reason for this stagnation, he added, is that the Type IA supernova detonation process remains shrouded in mystery. Specifically, it's unclear what spurs the transition from "deflagration" (a flame moving at less than the speed of sound) to "detonation" (a much more powerful event driven by a supersonic shock).

But the new study, which Poludnenko led, could help clear things up considerably.

He and his colleagues simulated the critical deflagration-to-detonation transition (DDT) using a newly devised model and performed laboratory experiments with chemical flames to check those results and validate the model.

The researchers found that the DDT in Type IA supernovae occurs spontaneously if flame-generated turbulence is high enough.

"We defined the critical criteria where we can drive a flame to self-generate its own turbulence, spontaneously accelerate, and transition into detonation," study co-author Kareem Ahmed, an assistant professor of mechanical and aerospace engineering at the University of Central Florida, said in a statement. "We're using the turbulence to enhance the mixing of the reactions to the point where it transitions into this violent reaction and essentially leads to supernovas."

The team also determined that this process is not unique to otherworldly thermonuclear blasts. (The new study does not deal with Type II supernovae, which occur when massive stars die and collapse.)

"This is the same mechanism that also occurs in chemical systems, like hydrogen-air or methane-air, for example," Poludnenko told Space.com. "Therefore, there's sort of a unifying story behind all of this."

The team also worked out the conditions that will cause a white dwarf to go supernova. It's all about density: "DDT is almost inevitable at densities of 10^7 to 10^8 grams per cubic centimeter," Poludnenko and his colleagues wrote in the new study, which was published online today (Oct. 31) in the journal Science.

That is incredibly dense, which isn't surprising, considering that white dwarfs cram about half the mass of our sun into a sphere only slightly larger than Earth. (For perspective, Earth's density is 5.5 grams per cubic centimeter.)

Poludnenko hopes the new study helps open up Type IA supernovae to greater study. The next step, he said, involves applying the team's model to different explosion scenarios, to start nailing down the DDT details.

Such work could have far-reaching applications across cosmology and astrophysics. For example, though Type IA supernovae have similar intrinsic brightnesses, there is some variation here and there, Poludnenko said. And these slight differences might introduce biases into astronomers' calculations.

"These biases are critical, because they would affect the accuracy of how we calibrate distances in the universe and how we measure the properties of dark energy," Poludnenko said.

"Now, if we know how these things work, we can try to discover these biases," he added. As an example, he cited the possibility that Type IA supernovae that formed in older galaxies might have different brightnesses than their counterparts from young galaxies.

The new study could also have some applications here on Earth, potentially leading to improved propulsion systems for aircraft and spacecraft and more efficient power generation, team members said.