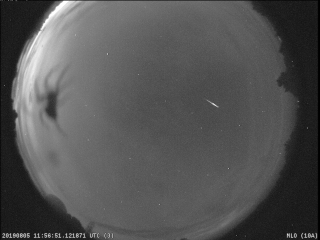 A NASA camera located near Tucson, Arizona, captured this image of a spider and a Perseid meteor on Aug. 5, 2019.
(Image: © NASA)

How do you spot a "shooting star"? Well, you don't look for eight legs; that's for sure.

But a NASA camera designed to photograph meteors spotted more than it bargained for during the Perseid meteor shower, when a curious spider stopped by. The photograph was taken at Mt. Lemmon SkyCenter near Tucson, Arizona, on Aug. 5, 2019.

NASA maintains a network of 17 all-sky cameras, which capture black-and-white images of the entire sky using a fish-eye lens. The cameras are designed to spot fireballs, which are meteors that enter Earth's atmosphere in a streak brighter in the sky than Venus.

Related: Perseid Meteor Shower 2019: When, Where & How to See It

All-sky cameras regularly spot critters that are a little more terrestrial than meteors. NASA has previously published photos of a bug, an owl and a small bird stopping by an all-sky camera. And this recent spider visit isn't the first time NASA has dealt with a photogenic arachnid: In 2007, a plumper spider crawled over a camera poised to watch the launch of the space shuttle Atlantis.

The Perseid meteor shower is traditionally the best one of the year, but this year, the streakers are difficult to make out against the glow of the waxing moon. The Perseids peak Aug. 12, when skywatchers could spot between 10 and 15 meteors per hour, and the meteor shower continues through Aug. 24. The Perseids  happen when Earth plows through debris surrounding Comet Swift-Tuttle.