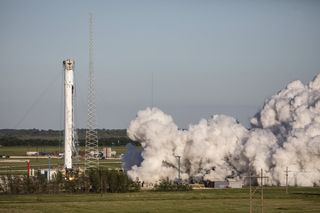 The center core of a SpaceX Falcon Heavy rocket undergoes a static fire test at the company's Texas facility in late April 2019, to prepare for a June liftoff that will send 23 satellites to orbit.
(Image: © SpaceX via Twitter)

Just two weeks after SpaceX's Falcon Heavy rocket aced its first commercial mission, the company is gearing up for another flight of the powerful launcher.

SpaceX performed a static fire test with a Heavy core stage at its Texas facility recently, to lay the groundwork for a June launch that will send 23 satellites to orbit.

"Falcon Heavy center core booster completed a static fire test at our rocket development facility in McGregor, Texas ahead of its next mission → http://spacex.com/stp-2," SpaceX representatives wrote via Twitter on Friday (April 26).

The three first stages are reusable, and they're designed to come back to Earth for pinpoint landings shortly after launch. During the Heavy's previous mission, an April 11 launch that lofted the Arabsat-6A communications satellite, all three boosters aced their touchdowns — the two side boosters on terra firma and the central core on a ship at sea. (The core didn't make it safely back to shore, however; rough seas caused it to topple.)

The upcoming mission, the first Heavy flight for the United States Department of Defense, is called Space Test Program-2 (STP-2). It's scheduled to launch on June 22 from historic Pad 39A at NASA's Kennedy Space Center in Florida, according to Spaceflight Now.

If all goes according to plan, the rocket will deliver nearly two dozen spacecraft to a variety of orbits.

"The STP-2 mission will be among the most challenging launches in SpaceX history with four separate upper-stage engine burns, three separate deployment orbits, a final propulsive passivation maneuver and a total mission duration of over six hours," SpaceX representatives wrote in a mission description.

"In addition, the U.S. Air Force plans to reuse side boosters from the Arabsat-6A Falcon Heavy launch, recovered after a return to launch site landing, making it the first reused Falcon Heavy ever flown," they added.

The 23 satellites going up on June 22 are a diverse lot that will be operated by a variety of customers, not just military organizations.

For example, NASA's Green Propellant Infusion Mission will test a new type of fuel that could improve the safety and efficiency of spacecraft propulsion. And a craft called Prox-1, which was built by students at the Georgia Institute of Technology, will demonstrate the ability of small satellites to perform close-encounter operations, according the SpaceX mission description site.

STP-2 will be the third Falcon Heavy mission overall. The rocket first took flight in February 2018, on a demonstration mission that sent SpaceX founder and CEO Elon Musk's red Tesla Roadster into orbit around the sun.