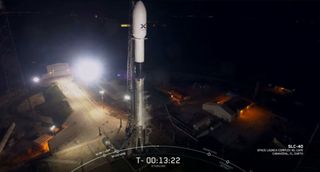 SpaceX will have to wait at least one more day to start setting up its internet-satellite megaconstellation.

A Falcon 9 rocket was scheduled to launch the first 60 of SpaceX's Starlink satellites tonight (May 15) from Cape Canaveral Air Force Station in Florida, but Mother Nature didn't cooperate: Strong high-altitude winds forced the company to push the attempt by 24 hours.

SpaceX made that call just seconds before beginning its launch livestream at 10:45 p.m. EDT (0245 GMT).

Standing down today due to excess upper level winds. Teams are working toward tomorrow's backup launch window, which opens at 10:30 p.m. EDTMay 16, 2019

The next liftoff opportunity will come tomorrow (May 16) at 10:30 p.m. EDT (0230 GMT on May 17), SpaceX representatives said. You can watch it live here at Space.com when the time comes, courtesy of SpaceX, or directly via the spaceflight company.

The launch will also feature a landing attempt by the Falcon 9's first stage on one of SpaceX's drone ships in the Atlantic Ocean. This particular first stage already has two flights, and two successful touchdowns, under its belt.

Starlink is designed to provide affordable internet access to people around the world. But these first 60 satellites won't be nearly enough to get that job done: Six more such launches will be needed to provide "minor" coverage, and 12 are required for "moderate" coverage, SpaceX representatives have said.

And the constellation could get much bigger still, eventually numbering in the thousands, company founder and CEO Elon Musk has said.

This will be the second Starlink launch SpaceX has performed. The company launched two prototype spacecraft nicknamed Tintin A and Tintin B in February 2018.