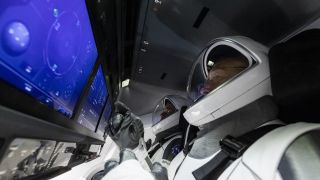 SpaceX's epic first crewed launch has been a decade in the making for NASA.

On Wednesday (May 27), a SpaceX Falcon 9 rocket is scheduled to rise from Pad 39A at NASA's Kennedy Space Center in Florida, sending astronauts Bob Behnken and Doug Hurley toward the International Space Station (ISS) aboard a Crew Dragon capsule. The mission, called Demo-2, will be the first orbital crewed flight to launch from U.S. soil since NASA's space shuttle fleet retired in July 2011.

And Crew Dragon is indeed a successor to the shuttle — one of two successors, in fact, along with Boeing's CST-100 Starliner spacecraft. Both capsules have been developed with funding from NASA's Commercial Crew Program, which got up and running in 2010.

NASA's plan back then was to have at least one private American crewed spaceship flying by 2015. That timeline would limit the nation's total dependence on Russian Soyuz spacecraft — the only astronaut taxi left after the shuttles' grounding — to four years.

It's taken a bit longer than that, of course. But the delay isn't terribly surprising in retrospect, considering that an orbital crewed vehicle had never before been developed via such a public-private partnership.

"There were a lot of skeptics back in the day, and a lot of uncertainty about whether or not this model was a good idea even," former NASA astronaut Garrett Reisman, a professor of astronautics practice at the University of Southern California, told Space.com.

"You had government, industry and NASA administration all, at various different times, looking like they were going to shut this down," said Reisman, who worked for SpaceX from 2011 to 2018. He served as the company's director of crew operations during the latter part of that run and remains a consultant to SpaceX today.

The groundwork for commercial crew was laid in 2006, with the establishment of NASA's commercial cargo program. This project ended up nurturing two operational robotic ISS resupply craft, SpaceX's cargo Dragon and the Cygnus vehicle, which is built by Northrop Grumman. Dragon made its first trip to the ISS in 2012, and Cygnus followed suit the next year. Both are still flying today.

These "CCDev-1" deals — the program was then known as Commercial Crew Development — aimed to encourage the maturation of a range of human spaceflight technologies. Paragon got money to work on key aspects of a life-support system, for example, and ULA's funding was intended to help human-rate its workhorse Atlas V rocket.

The next funding round, CCDev-2, was announced in April 2011. These deals were richer, awarding a total of $270 million to Blue Origin, Boeing, Sierra Nevada and SpaceX. Boeing got $92 million to work on Starliner, and SpaceX received $75 million to aid development of Crew Dragon.

The money got bigger still with the Commercial Crew integrated Capability (CCiCap) contracts, which were announced in August 2012. Sierra Nevada received $212 million to continue work on its Dream Chaser space plane, and Boeing and SpaceX got $460 million and $440 million, respectively.

The final cull came two years later, and NASA didn't end up putting all of its eggs in one basket. In September 2014, the agency announced that Boeing and SpaceX had won Commercial Crew Transportation Capability (CCtCap) deals, which covered final development work on their spaceflight systems as well as six operational crewed flights to and from the ISS. Boeing's deal was worth $4.2 billion, and SpaceX got $2.6 billion.

"I think it was a wise decision to pursue two suppliers for launch services," space policy expert John Logsdon, a professor emeritus of political science and international affairs at George Washington University's Elliott School of International Affairs in Washington, D.C, told Space.com. "That decision will pay off."

Bumps in the road

Around the time the CCtCap contracts were awarded, NASA officials said they wanted at least one of the new private astronaut taxis to be operational by late 2017.

That didn't happen, of course. Funding shortfalls may have contributed to the delay; over the years, Congress has repeatedly given less money to Commercial Crew than the White House asked for in federal budget requests. Technical challenges have played a role as well. Spaceflight is hard, after all, and human spaceflight is especially so.

For instance, SpaceX looked poised to launch Demo-2 last year. In March 2019, Crew Dragon visited the ISS for the first time, acing an uncrewed, eight-day mission called Demo-1. But a month later, that same capsule exploded during a ground test of its launch-abort system. The schedule moved to the right, obviously, as SpaceX investigated the cause of the mishap (a faulty valve) and made some design changes to ensure it won't happen again.

Boeing has experienced some bumps in the road as well. Starliner launched on its version of Demo-1, called Orbital Flight Test (OFT), in December 2019. But things didn't go as planned. The capsule suffered a glitch with its timing system and got stranded in an orbit too low to allow a rendezvous with the ISS. Starliner will refly OFT before carrying astronauts, and it's not clear when that makeup mission will lift off.

But all that being said, Crew Dragon is now sitting atop its Falcon 9 rocket on the launch pad, waiting for Behnken and Hurley to ride it into history.

And Demo-2 will will be just the beginning, if all goes according to plan. For example, SpaceX sees the mission as a key step toward a bold future in which the company helps humanity colonize Mars, among other ambitious exploration feats.

For its part, NASA wants Demo-2 to kick off a new era of public-private exploration that allows the United States to accomplish great things in the final frontier. For instance, the space agency is also relying heavily on private industry in its Artemis program of lunar exploration, which aims to land two astronauts near the moon's south pole in 2024 and establish a sustainable human presence on and around the moon by 2028. (SpaceX is one of three companies that just received funding to develop a lunar landing system for Artemis.)

Demo-2 "will be a reminder of the US aspiration to lead the development of the space frontier," Logsdon said. "It will remind us of what we could be doing and, in my view, should be doing."

But we can't take NASA's exploration goals for granted, he stressed. After all, history books are full of grand space dreams that withered on the vine, and only time will tell if the momentum generated by Demo-2 will last.

"Is there a national will to continue down the path [laid out by] this mission and the progress on Artemis?" Logsdon said. "Is the country serious about this?"