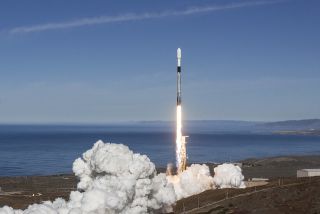 A SpaceX Falcon 9 rocket with a twice-flown first stage launches from Vandenberg Air Force Base in California on Dec. 3, 2018, carrying 64 satellites to orbit on the SSO-A: Smallsat Express mission.
(Image: © SpaceX)

SpaceX wants to ramp up its rocket reuse, and soon.

The company commonly lands and reflies the first stages of its Falcon Heavy and Falcon 9 rockets, as a way to reduce the cost of spaceflight. Indeed, three Falcon 9 boosters already have three missions under their belts.

And one or more of those veteran first stages could fly at least two more times this year, if everything goes according to plan. At a conference in Indonesia on Wednesday (June 26), Jonathan Hofeller, SpaceX’s vice president of commercial sales, said the company aims to fly a single first stage five times by the end of the year, SpaceNews reported Friday (June 28).

Related: The Evolution of SpaceX's Rockets in Pictures

Even that achievement would just be scratching the surface of the rocket's reuse potential. SpaceX founder and CEO Elon Musk has said that the first stage of the current iteration of the Falcon 9, known as the Block 5, should be able to fly at least 10 times with only inspections between flights, and 100 times with some refurbishment involved.

Similar reuse rates should apply to the Falcon Heavy, which is composed of three modified Falcon 9 first stages, with a second stage sitting atop the central booster.

Hofeller broke some more news at the conference Wednesday. He announced that SpaceX is targeting 2021 for the first commercial launch of its next-generation spacecraft, known as Starship.

"We are in discussions with three different customers as we speak right now to be that first mission," Hofeller said, according to SpaceNews. "Those are all telecom companies."

Starship will launch atop a huge rocket called Super Heavy; both vehicles will be reusable. The duo will ferry people to and from the moon, Mars and other distant destinations — Starship will be able to accommodate 100 passengers, Musk has said — and will also launch satellites, carry people on point-to-point trips around Earth, and do whatever else SpaceX needs it to do. (The company plans to phase out the Falcon 9, Falcon Heavy and the crew and cargo versions of its Dragon capsule once Starship and Super Heavy come online.)

Starship currently has just one mission on its docket, as far as we know. Last year, Japanese billionaire Yusaku Maezawa booked the craft to take him and a collection of artists around the moon, a bold mission targeted to launch in 2023.

The Falcon Heavy flew for the third time ever on Tuesday (June 25), successfully lofting 24 satellites for a variety of customers. SpaceX landed the rocket's two side boosters, but the central core came up short in its attempt to touch down on a drone ship at sea.

In a first for SpaceX, the company's net-equipped boat, GO Ms. Tree, managed to snag half of the Heavy's payload fairing on Tuesday morning. SpaceX wants to keep payload fairings, which protect satellites during launch, out of the corrosive seawater so this gear can be more feasibly and efficiently reused. Each Falcon 9 and Falcon Heavy fairing costs about $6 million, Musk has said.

SpaceX's fairings come back to Earth in two pieces, both of which are equipped with parachutes and small steering thrusters to aid recovery efforts.