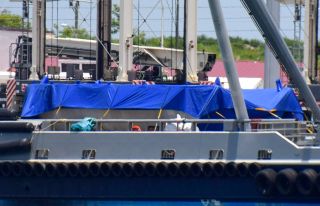 A blue tarp on the deck of the ship GO Ms. Tree covers the first payload fairing SpaceX has ever managed to pluck out of the sky.
(Image: © Amy Thompson/Space.com )

CAPE CANAVERAL, Fla. — Onlookers adorned the shoreline of Port Canaveral here on Thursday (June 27) as the first of SpaceX's recovery fleet returned home. On the deck of the ship, shrouded in a blue tarp, sat the first-ever air-caught payload fairing.

The fairing was plucked out of the sky early Tuesday morning (June 25) by SpaceX's net-equipped ship, called GO Ms. Tree, shortly after the launch of a SpaceX Falcon Heavy rocket.

Payload fairings are designed to protect satellites during launch. SpaceX fairings come in two halves, which are jettisoned once their rocket reaches space. Together, the two pieces cost about $6 million — a hefty chunk of the overall rocket cost. (It currently costs a minimum of $90 million to book a Falcon Heavy launch and $62 million for SpaceX's workhorse Falcon 9 rocket.)

SpaceX already reuses its first-stage rocket boosters, but it wants to expand its recycling efforts to include the fairings, further reducing launch costs. To that end, the California-based aerospace company equips both fairing halves with parachutes and small steering thrusters, to navigate themselves back to Earth and into GO Ms. Tree's net. (The ship actually caught just one of the two fairing halves Tuesday, according to SpaceX launch commentators.)

GO Ms. Tree may sound unfamiliar, but SpaceX has been using the ship for a while. The ship just used to operate under a different name —  Mr. Steven. And the moniker isn't the only thing that has changed. GO Ms. Tree recently received a new net and a new paint scheme as well.

A company called Guice Offshore (GO) leases the recovery ship from SeaTran, but the name change (and new paint scheme) are good indicators that perhaps the company purchased the ship outright.

Last week, eagle-eyed SpaceX enthusiasts spotted Mr. Steven docked in port, stripped of its identity. Ship labels on marine tracking websites also indicated that it was in the midst of a name change.

There's a bit of mystery behind Ms. Tree's new name. The ship was originally built for SeaTran Marine and dubbed Mr. Steven after the CEO's father, Steven Miguez. However, SeaTran filed for bankruptcy last year, in an effort to protect its fleet.

GO, SpaceX's primary fleet manager on both coasts, owns and operates nine boats, three of which are leased to SpaceX (GO Quest, GO Searcher and GO Navigator). It stands to reason that GO might acquire the fairing catcher as well, especially since the ship has been renamed to match the rest of its fleet.

The vessel, which is 205 feet long by 34 feet wide (62 by 10 meters), joined SpaceX's recovery fleet in 2017. Going by its original moniker then, Mr. Steven, the ship sailed on scene equipped with four outstretched arms resembling a giant claw with a net strung in between.

After the company's Falcon 9 rocket hauled a Spanish radar imaging satellite into space in February 2018, a falling fairing half would land in the vessel's giant net, much like a baseball would land in a catcher's mitt. Or at least that's what SpaceX hoped would happen.

That first attempt failed by a few hundred meters, but SpaceX didn't give up. The fairing catcher ventured back out to sea for three subsequent attempts. Although none of those tries ended with a successful catch, SpaceX used the opportunity to gather critical data that would help the company going forward.

When fairings fall back to Earth, they're typically reduced to scrap metal if they slam into the water or are exposed to briny sea water. Elon Musk has repeatedly stressed the corrosive nature of salt water, explaining that the company wants to reduce costs by cutting down on the refurbishments that each fairing half goes through after landing in the ocean. And that's where Ms. Tree comes in.

SpaceX has spent nearly two years testing the net-ship technique during select launches as well as numerous drop-tests. The vessel has gone through many design changes, including three different sets of arms and four nets. (One set was badly damaged when high seas thwarted the ship's first East Coast recovery attempt earlier this year.)

Tuesday's successful aerial stunt comes after a year and a half of trying and failing. Up until now, none of the fairings were able to stick their landings in Ms. Tree's outstretched net, though the company has recovered several from the ocean.

Now that it's been recovered (without first taking a dip in the Atlantic), the hardware may be used again on a future flight. So far, the company has yet to refly any fairings, but Musk has said that the equipment will be reused on launches of SpaceX's Starlink internet satellites. That could expand to more missions, especially if Ms. Tree continues to recover them.