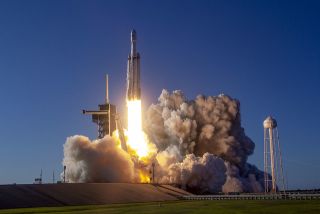 CAPE CANAVERAL, Fla. — SpaceX is gearing up for the next flight of the company's megarocket, the Falcon Heavy.

Essentially three Falcon 9 boosters strapped together, the behemoth will lift off from the historic Pad 39A at NASA's Kennedy Space Center, on Monday (June 24), and for the first time, it will do so at night.

Late last night (June 19), and after several hours of weather-related delays, the massive rocket roared to life, as smoke billowed from its engines during a preflight test. The brief ignition, known as a static-fire test, is one of the last major milestones in launch preparations, ensuring that all systems are working properly and that the rocket is ready to fly.

Related: This Is What 2 Dozen Satellites Look Like on a SpaceX Falcon Heavy

Just before 1 a.m. local time (0500 GMT), SpaceX tweeted that the test was a success and that the company was targeting a Monday evening launch.

The upcoming mission, known as STP-2, will lift off sometime during a planned 4-hour launch window, which opens at 11:30 p.m. EDT (0330 GMT on June 25). Managed by the Air Force via its Space Test Program (STP for short), STP-2 is the next epic ride-share SpaceX plans to pull off.

Like in a cosmic Uber pool, two dozen satellites will ride to orbit nestled inside the Falcon Heavy's nose cone. This will mark the third flight for Falcon Heavy but the first to carry more than one satellite. SpaceX's flagship rocket, the Falcon 9, is a 5-star space taxi, having now ferried more than 60 satellites into orbit in a single launch.

While 24 satellites is hardly the largest payload a Falcon-series rocket has taken to orbit, the upcoming flight will still be challenging because of the range of orbits the satellites need to reach. "This will be our most difficult launch ever," SpaceX founder Elon Musk tweeted prior to Wednesday's static fire-test.

The Falcon Heavy consists of three Falcon 9 first stage boosters, strapped together, with the rocket's second stage (and the payloads) attached atop the center, core booster. All three of the Heavy's first-stage boosters are designed to be reusable. In a first, the STP-2 mission will rely on preflown side boosters to make the climb to orbit. The scorched side boosters previously flew in April, when Falcon Heavy catapulted a massive communications satellite, dubbed Arabsat-6A, into space.

After depositing their payload, the boosters stuck their landings at Cape Canaveral Air Force Station. The central core also successfully touched down on a SpaceX "drone ship," but that booster fell victim to rough seas, toppling over into the ocean before reaching shore.

But this is the vehicle's first launch carrying a government payload, so the Air Force is paying close attention to how the vehicle performs during launch. The government reportedly requested that a dummy nose cone be affixed to the rocket during prelaunch testing. According to Spaceflight Now, the fairing is a "nonflight component," which was added to help the Air Force collect acoustic data.

The flight-ready nose cone, complete with a bevy of 24 payloads, will be attached to the rocket prior to Monday's launch. Among the passengers are an atomic clock built by NASA, a satellite designed to test a greener spacecraft propellant and a solar-sailing cubesat dubbed LightSail 2 from The Planetary Society.