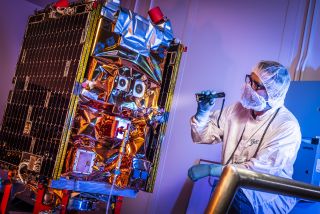 The pressure to "go green" will soon travel outside of our horizon and into space.

NASA's Green Propellant Infusion Mission (GPIM) is currently scheduled to launch on June 24 on a SpaceX Falcon Heavy rocket as part of a technology-testing mission dubbed STP-2. GPIM, a small, box-shaped spacecraft powered by green technology, will test out a low-toxicity propellant in space for the first time, according to NASA. The clean propellant, a hydroxyl ammonium nitrate fuel/oxidizer mix called AF-M315E, will serve as an alternative to hydrazine, a highly toxic compound used in rocket fuel to power satellites and spacecraft.

"It's important that we develop technology that increases protections for launch personnel and the environment, and that has the potential to reduce costs," Steve Jurczyk, associate administrator of NASA's Space Technology Mission Directorate, said in a statement.

GPIM, which cost NASA a total of $65 million, has been in the works for years now and passed its first thruster pulsing test in 2013. This month marks another step toward the agency's goal of providing a sustainable and efficient alternative fuel for spaceflight.

The fuel is also higher in density, meaning that more of it can be stored in less space, and it has a lower freezing point, and so requires less spacecraft power to maintain its temperature, according to NASA.

And compared with hydrazine, the fuel is much safer for humans. "It's pretty benign, and we think that it can be loaded at universities or other environments where you're not typically doing propellant-loading operations," Dayna Ise, the technology demonstration missions program executive in NASA's Space Technology Mission Directorate, said during a media call held on June 7. "Oh, and you can send it through FedEx, so it's safe enough to be FedExed around the country."

Ball Aerospace, a spacecraft manufacturer in Colorado, has been working with subcontractor Aerojet Rocketdyne and NASA scientists to develop a propulsion system for the green fuel.

GPIM is one of four NASA technology missions among the payloads of the STP-2 mission that a SpaceX Falcon Heavy is scheduled to launch on June 24.