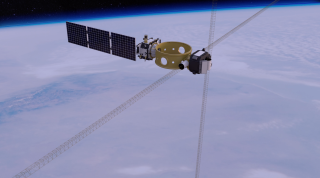 To help protect satellites in space, NASA is exposing a small spacecraft to a whole lot of space radiation.

NASA's Space Environment Testbeds (SET) mission is currently scheduled to launch on June 24 on a SpaceX Falcon Heavy rocket as part of a technology-testing mission dubbed Space Test Program-2 (STP-2). SET aims to study space weather, which refers to the weather conditions within the solar system, and how radiation affects spacecraft, in order to build better-equipped ones for future space exploration.

"You don't want to launch something that can't withstand the environment," Nicola Fox, director of NASA’s Heliophysics Division, said during a media call held on June 7. "These particular missions will help us look at the right kind of material and the best possible technology that we can do in space."

Radiation is one of the main hazards threatening space missions. Energetic particles emitted by the sun or found in deep space can damage both the software and hardware of spacecraft over time.

SET is one of three experiments on the  the Demonstration and Science Experiments
spacecraft (known as DSX), a U.S. Air Force spacecraft that itself is one of 24 differnt payloads launching on SpaceX's STP-2 mission. It will aim for the gap between Earth's radiation belts, which are known as the Van Allen belts. The gap, which scientists call the slot region, is full of radiation trapped by the planet's magnetic field ― especially during a magnetic storm. These storms occur when there is a change in the magnetic field either from solar winds or the sun's magnetic field connecting with that of Earth's.

"There haven't been too many measurements to tell us how bad things get in the slot region," Michael Xapsos, from the SET Project Scientist Team, said in a statement. "That's why we're going there."

Using the information collected by SET on space weather in that area, NASA hopes to build not only better-protected spacecraft but more efficient ones as well.

"We want to make sure we have the right design margin," said Fox. "It's very expensive to put kilograms on space … God knows, you don't have to launch a battleship if all you need is a dinghy."

Visit Space.com on Monday, June 24, for complete coverage of the STP-2 mission.