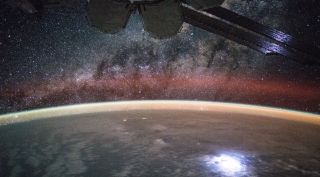 The Atmospheric Waves Experiment (AWE) will study the colorful airglow of the upper atmosphere from its perch on the International Space Station.
(Image: © NASA)

WASHINGTON — NASA has selected a space weather experiment to fly to the International Space Station as the agency's heliophysics program seeks to strike a balance between large and small missions.

NASA announced Feb. 25 that it will fly the Atmospheric Waves Experiment (AWE) to the ISS in August 2022. AWE will study the effects of both solar activity and terrestrial weather on the upper atmosphere by monitoring airglow in that region.

AWE, with an estimated cost of $42 million, was one of two finalists selected by NASA in July 2017 as a heliophysics mission of opportunity for NASA's Explorers program of small missions. The other finalist was the Sun Radio Interferometer Space Experiment (SunRISE), a constellation of cubesats that would act as a synthetic aperture radio telescope to study the formation of solar storms.

SunRISE did receive a consolation prize in the form of a $100,000 "extended formulation" study for the next seven months to mature the mission design. However, it's unclear what the future of the mission concept will be once that study is completed.

In a presentation earlier Feb. 25 at a National Academies committee meeting, Nicky Fox, director of NASA's heliophysics division, said that the selection of the mission of opportunity was "imminent" but wasn't more specific about when NASA would announce the winning mission. Later in the day, at the same meeting, she announced that NASA had selected AWE.

In addition to the mission of opportunity under the Explorers program, there's an ongoing competition for a Small Explorers, or SMEX, heliophysics mission to perform solar and space physics. NASA chose five proposals in July 2017 for Phase A studies. A decision on one or more is also expected soon.

"We are doing the final pieces for the selection among those five," such as site visits, she said. She declined to say if NASA might select more than one SMEX proposal, citing the ongoing competitive procurement. The agency hopes to announce that selection in April, she said later in the meeting.

The heliophysics division is gearing up for the next competitive mission selection, a Medium-class Explorer, or MIDEX, mission. A draft announcement of opportunity (AO) will be released in March, Fox said, with a final version to follow in June. That schedule was not affected by the five-week partial government shutdown. The winning MIDEX mission would fly by early 2026, with a cost cap of $250 million.

Fox was speaking at a meeting of a committee performing a midterm review of the decadal survey for solar and space physics, published in 2012. One of the recommendations of that report was an expansion of the Explorers program in heliophysics, alternating between SMEX and MIDEX missions every two to three years.

Fox argued that NASA was meeting that recommendation with its current cadence of missions. "We are definitely in line with the recommendations," she said, with the SMEX missions now being selected having been proposed in 2016 and the upcoming MIDEX competition. "I think we're doing very well."

NASA plans to continue that cadence into the future, although she noted that planning for Explorer mission competitions into the 2020s is still notional. That would also include alternating between SMEX and MIDEX, assuming sufficient budgets. "I think the goal would be to do that," she said. "I think it's good for the community to do that as well."

One goal of the Explorer missions is to balance the smaller number of large heliophysics missions, like the Parker Solar Probe mission launched last year. There has been concerns in the community that Parker, with a total cost of more an $1 billion, would suffer overruns that would compromise that balance, but the mission stayed within its cost cap.

"It's a great time to be a heliophysicist," Fox, previously the project scientist for Parker Solar Probe, said at the committee meeting, emphasizing the pace of missions. "As somebody who came from the community into NASA, I can say it made a big difference, the excitement of actually knowing there was going to be an AO coming out."