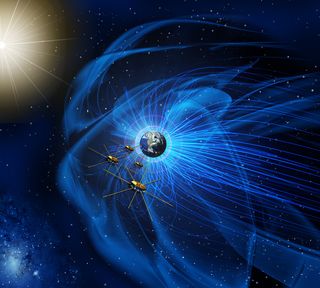 This artist's illustration shows NASA's four identical Magnetospheric Multiscale mission satellites flying in near the sun-facing edge of the Earth's magnetic field. The spacecraft have made the first-ever detection of a magnetic reconnection, an explosive energy burst, between the magnetic fields of Earth and the sun.
(Image: © NASA)

Explosive storms spawned by interactions between the magnetic fields of Earth and the sun can endanger satellites, spacecraft and astronauts in space, as well as power grids on Earth. Now, a fleet of NASA spacecraft has for the first time directly witnessed the mysterious way in which these magnetic explosions occur.

This work could help shed light on dangerous solar outbursts and help improve the design of advanced nuclear reactors, researchers said. The discovery was made using NASA's  Magnetospheric Multiscale mission (or MMS for short), which launched four spacecraft into Earth's magnetosphere, the bubble of plasma controlled by the planet's magnetic field.

"We hit the jackpot," study co-author Roy Torbert, deputy principal investigator of MMS, said in a statement. "We were able to perform the first-ever physics experiment in this environment." [NASA's Magnetospheric Multiscale Mission in Pictures]

"Imagine two trains traveling toward each other on separate tracks, but the trains are switched to the same track at the last minute," study co-author James Drake, at the University of Maryland, said in a statement. "Each track represents a magnetic field line from one of the two interacting magnetic fields, while the track switch represents a reconnection event. The resulting crash sends energy out from the reconnection point like a slingshot."

Magnetic reconnection can have major impacts on Earth. For example, it drives explosive solar events such as solar flares and coronal mass ejections. These, in turn can generate not only spectacular auroras, but also geomagnetic storms. In 1989, a geomagnetic storm blacked out the entire Canadian province of Quebec, leaving millions of people in the dark and damaging transformers as far away as New Jersey. Storms 10 times worse are possible, such as an 1859 solar superstorm known as the Carrington Event.

Magnetic reconnection can also hamper experimental nuclear-fusion reactors that aim to re-create the power that drives the sun and stars here on Earth. These reactors often attempt to use magnetic fields to confine and heat plasmas to the point where nuclear fusion is triggered. "If this can be done, it would solve the energy crisis permanently," Burch told Space.com.

"One of the main things that is keeping magnetic-confinement fusion from working is reconnection, which causes 'sawtooth crashes' — these are periodic reductions in electron temperature, which keep the temperature below the fusion trigger point," Burch explained. "A better understanding of reconnection could lead to methods of quenching it in these devices." [Watch: NASA Video Explains Magnetic Reconnection]

Scientists want to pinpoint exactly what triggers magnetic reconnection, but until now, researchers have seen reconnection only in the laboratory. MMS is the first space mission focused on understanding how this phenomenon works not just on Earth, but also on the sun, other stars and throughout space.

"We've studied it theoretically, and we've simulated it with supercomputers, but up to now we haven't known what controls the conversion of magnetic energy into particle energy," Burch said in a statement. "We designed the MMS mission to use Earth's magnetosphere as a giant laboratory to perform the definitive experiment on reconnection."

MMS is made up of four identical solar-powered spacecraft, each equipped with an identical set of 11 instruments made of 25 sensors, the fastest-responding sensors that NASA has ever flown. The octagonal, 3,000-lb. (1,360 kilograms) probes are flying in a near-equatorial orbit, ranging from about 6 to 250 miles (10 to 400 kilometers) from each other.

"There have been theories about the movement of electrons in magnetic reconnection for decades, but this is the first real proof of what they do," study co-author Jonathan Eastwood, at Imperial College London, said in a statement. "We have known what should be there, but knowing and actually measuring are two very different things."

The spacecraft not only examined electron motions on a minute scale, but also tracked electrons much faster than previous satellites had, imaging the particles once every 30 milliseconds.

"Satellite measurements of electrons have been too slow by a factor of 100 to sample the magnetic reconnection region," study co-author Tom Moore, at NASA's Goddard Space Flight Center in Greenbelt, Maryland, said in a statement. "The precision and speed of MMS, however, opened up a new window on the universe."

"The level of detail allows us to see things that were previously a blur," Drake said in a statement.

On Oct. 16, 2015, MMS flew directly through the heart of a reconnection region in Earth's magnetosphere.

The data showed a drop in the magnetic field to near zero, ions flowing in opposite directions, accelerated electrons, a strong electrical current and an enhanced electric field — all signs that the spacecraft had entered an electron-dissipation region, the researchers said.

However, the key signature of reconnection was a spike detected in the electric power generated by the electrons, the researchers said.

"This was the 'smoking gun' for reconnection," Burch said in a statement. "It was theoretically predicted, but never seen until MMS."

The spacecraft also saw electrons in the electron-dissipation region rapidly accelerate outward along magnetic field lines opened during reconnection. The researchers said this was due to the interconnection of the solar and terrestrial magnetic fields, the first time scientists have definitively measured such an event.

"These data have truly opened a new window on the part of the universe where reconnection occurs," Burch said. "Where before we had 'telescopes' to view the results of reconnection, we now have a 'microscope' that for the first time allows us to see reconnection in action."

It remains a mystery how electric fields are generated during magnetic reconnection. "There are several theories, and choosing among them require measurements with all four spacecraft within the reconnection region simultaneously," Burch said. "So far, we have had three inside it simultaneously, with the fourth one coming in slightly later. We plan to reduce the spacecraft separation from 10 km [6.2 miles] to closer to 5 km [3.1 miles] to address this issue."

The MMS mission is currently in its first phase, with spacecraft flying through reconnection sites on Earth's dayside, where matter from the sun connects with Earth's magnetic field.

"In the tail, we should have no problem getting all four spacecraft in the reconnection region at once," Burch said.

The scientists detailed their findings online May 12 in the journal Science.