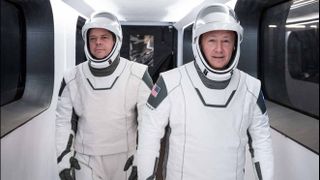 NASA astronauts Bob Behknen (left) and Doug Hurley will be the first to fly on SpaceX's Crew Dragon spacecraft during the Demo-2 mission. It could launch in Spring 2020. Here, they walk through the access arm in a dress rehearsal for launch during SpaceX in-flight abort preparations.
(Image: © SpaceX)

It's been nearly nine years since an American vehicle launched astronauts into orbit. This month, SpaceX and NASA aim to change that in an unprecedented test flight six years in the making.

NASA astronauts Bob Behnken and Doug Hurley are due to launch to the International Space Station from Florida aboard a SpaceX Crew Dragon capsule on May 27. A crewed U.S. spacecraft last accessed the orbiting laboratory in 2011. Since then, NASA astronauts have launched on Russian Soyuz vehicles as NASA quietly stewed. Of the 20 years that the space station has been continually inhabited, the U.S. has been without a crew vehicle capable of reaching the orbiting laboratory for nearly half that period.

"We need to make sure that we keep [the space station] crewed," NASA Administrator Jim Bridenstine said during a news conference held today (May 1). "That's what commercial crew is all about. This is a new generation, a new era in human spaceflight."

The launch later this month has been in the works since 2014, when NASA signed contracts with SpaceX and Boeing under the agency's Commercial Crew Program. But delay after delay has plagued the program, and neither company has attempted to launch humans yet.

The slow progress has forced NASA to continue buying Soyuz seats from Russia, most recently for a launch in April 2020, after both SpaceX and Boeing failed to launch astronauts in 2019.

Bridenstine said during today's news conference that he expects a deal for a Soyuz seat on an October launch to be finalized within days, and that the agency may look to purchase another on a flight for spring 2021. In the meantime, just one NASA astronaut, Chris Cassidy, is currently in space; but the U.S. side of the station requires four crew members to achieve its targeted science productivity.

"Chris is an amazing astronaut, he's working very hard, but there's more work than Chris can do," Kirk Shireman, program manager for the International Space Station Program at NASA's Johnson Space Center in Texas, said during the news conference.

"This launch is our next step toward increasing American, and really human presence on board the laboratory," Shireman said. "It really is critical. We're very much interested in significantly increasing the amount of crew time and the amount of throughput that we could do, this valuable research that we could do on board the International Space Station, things that can't be done anywhere else."

In order to try to create as much crew time as possible from this test flight, Shireman said, the duration of the mission will be evaluated after launch. The decision will be based on SpaceX's progress wrapping up work on the capsule for its first full-fledged crewed mission, which will carry NASA astronauts Michael Hopkins, Victor Glover Jr. and Shannon Walker, and Japanese astronaut Soichi Noguchi.

"What we would like to do from a station perspective is keep [Behnken and Hurley] on orbit as long as we can until that Crew-1 vehicle is just about ready to go," Shireman said. But NASA can't certify Crew Dragon for human flights until Demo-2 lands, and future missions can't launch without that certification.

That tradeoff underscores the fact that the Demo-2 flight is just that — a demonstration, despite the science NASA hopes the astronauts will do in orbit. Their first priority, however, is breaking in a new vehicle, one that humans have never flown before — a rare process in the history of spaceflight.

"We think about Mercury, Gemini, Apollo and then space shuttle: Those are really the four times in history where we have put humans on brand new spacecraft, and now we're doing it for a fifth time," Bridenstine said, noting that it will be the ninth global flight of a new crewed spacecraft. "It's been a long time since we put humans on a brand new spacecraft, but that's what this is. And it is truly a test flight, to be very clear."

SpaceX is feeling the pressure as well.

"My heart is sitting right here," Gwynne Shotwell, SpaceX's president and chief operating officer, said with her finger just below her chin. "And I think it's going to stay there until we get Bob and Doug safely back from the International Space Station. But between now and then there's still work to do."

Shotwell referenced one specific task SpaceX needs to tackle before launch: a final parachute test that was completed during the news conferences. Both SpaceX and NASA also have several flight-readiness reviews to clear before the crewed launch is approved. That said, SpaceX can rely on its nearly 10 years of experience visiting the space station with 21 uncrewed spacecraft.

"This is one of many exciting and hard days that we have in front of us," Kathy Lueders, program manager for the Commercial Crew Program at NASA's Kennedy Space Center in Florida, said during the news conference. "Gwynne's team and my team are diligently working on getting the vehicles ready, making sure that all the i's are dotted and t's are crossed in our analysis, test data, assessments, going through all our reviews, and making sure that we are ready for this important mission."

But neither delays nor to-dos are keeping the excitement at bay.

"I can't tell you how exciting a day this is for us," Lueders said. "Gwynne and I have been waiting for this for a while."