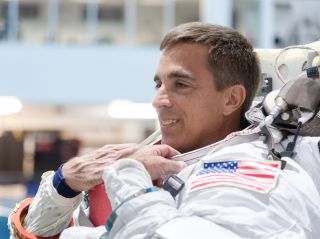 The International Space Station will reach an interesting point in its history around the 20th anniversary of continuous human occupation due to the commercial crew program.

In October 2020 (just before the anniversary on Nov. 2), NASA's two-time space veteran Chris Cassidy will leave the orbiting complex in a Russian Soyuz with rookie Russian cosmonauts Nikolai Tikhonov and Andrei Babkin. The trio, who make up the Expedition 62/63 crew, is expected to fly up in April and remain about five months, although dates are always subject to complex scheduling. Their journey will be one of the last in the current pattern of space station operations.

For now, NASA sends its astronauts to orbit by purchasing seats on Russian Soyuz spacecraft. It's been that way ever since the space shuttle retired in 2011. NASA and its U.S. commercial crew partners have been working for years to get the Boeing Starliner and SpaceX Crew Dragon spacecraft ready to carry astronauts. Technical, funding and programmatic issues have delayed that goal so far, but NASA is hoping to have the vehicles ready in the coming months. The big question is when.

Cassidy and his crewmates may find themselves alone at some point in their mission, waiting for commercial crew vehicles to bring up some more company. It's possible that these vehicles could be up and running by the eve of the November anniversary — or then again, perhaps not.

Cassidy said that the space station's continuous occupation began in 1999 under the command of a fellow Navy SEAL, Bill Shepherd. And Cassidy noted he will be in orbit until the eve of the anniversary himself. "The two of us are on bookends of a 20-year period, and that's pretty cool," he said in an interview on Thursday (Nov. 7).

Shepherd's mission marked a time of great change in the space station's operations, and so will Cassidy's. Cassidy is (so far) the last NASA astronaut scheduled for a Soyuz flight, although more are expected to come even after commercial crew comes into play. NASA still wants its astronauts to have experience on Russian vehicles, and vice versa.

In a livestreamed news conference held earlier Thursday, however, Cassidy said his crew is just focused on doing the best job it can amid the changes and uncertainty, even if there are only three of them on the space station for a long period of time.

As crews tend to do, the trio work closely to find humor even in the midst of preparing for a serious mission, as Cassidy related in an anecdote from training the day before the news conference. The astronauts were working in the virtual reality laboratory simulating a spacewalk, along with a robotic operation. Cassidy asked his crewmates how to say "clearance" in Russian because he wanted to talk about how much room there was between Canadarm2 and another object.

"They told me one word, and then another word," Cassidy recalled. "I thought and [I realized] that was 'clearance' for sale items [in a store], not clearance for structure. Then we digressed and had some humor about how Andrei likes sale items. He kept a very straight face and said, 'Guys, I'm busy here. Knock it off.'"

"Ready for any contingency"

Cassidy is a veteran of two eventful spaceflights. During space shuttle mission STS-127 in 2009, his crew delivered the Japanese Experiment Module's exposed facility to the International Space Station. He performed two spacewalks as part of a busy mission. But it was Expedition 35/36 in 2013 that brought his most memorable extravehicular excursions.

First, Cassidy and NASA crewmate Tom Marshburn repaired an ammonia leak in May 2013 on the outside of the space station. The leak had threatened to deprive the orbiting complex of vital cooling fluid and required contingency instructions sent up from the ground to address.

Two months later, Cassidy was working with European Space Agency crewmate Luca Parmitano during a spacewalk when the Italian astronaut's spacesuit suddenly developed a leak that filled Parmitano's helmet with water. In the potentially deadly situation, Parmitano couldn't talk because of the water. Cassidy relayed hand signals from him during pressurization in the airlock, the entire space station crew and NASA's Mission Control pulled together to bring Parmitano in swiftly, and the spacewalk ended safely.

When asked in the interview what he learned from these experiences, Cassidy quipped, "Leaks are bad." Turning serious, he said the real lesson was to continue drawing upon his training as a Navy SEAL and a NASA astronaut to be "ready for any contingency that happens."

"You don't know what is the next weird thing that is going to happen, but we practice for all the weird situations you can think of," he said. The key to overcoming these contingencies is communication, he said, between the astronauts and mission control on the ground.

"That's what, I think, makes NASA an effective team, just like an effective team in the business world," Cassidy said. "You do the basic things, and you'll be successful. That's the philosophy I bring to this mission."

In the news conference, Cassidy said there have been no real changes to how astronauts are trained for spacewalks since he arrived as a rookie astronaut in 2004. They continue to practice procedures in a big pool at NASA's Johnson Space Center known as the Neutral Buoyancy Laboratory, as well as in tabletop exercises and in virtual reality. Space station astronauts are generally trained on generic skills for spacewalking and then given the instructions for specific tasks closer to their flight date, or when contingencies happen.

Cassidy, however, pointed to the upcoming Alpha Magnetic Spectrometer spacewalks as particularly interesting excursions. Cassidy was involved in developing the procedures for these spacewalks, which use unique tools fashioned for a dark-matter instrument that wasn't originally designed to undergo in-orbit repair. According to a NASA statement, the upcoming spacewalks are the most complex the agency has undertaken since repairing and upgrading the Hubble Space Telescope for the last time in 2009.

Cassidy compared the complexity of the repair to trying to disassemble part of a car's engine while wearing bulky gloves. "It's really fun to see the engineers think of some ideas, and then put that into a mechanical thing that we can practice on," he said.

After his upcoming mission in space, Cassidy said he isn't sure if he will be one of the astronauts asked to go to the moon. NASA will likely select its first Artemis astronaut crews in late 2020 or early 2021 to start training for missions beginning with the planned 2024 landing, he said, and at that time he'll be finishing his space station flight and starting the long health recovery back on Earth. "I don't see myself being on one of the initial crews," he said, although he left the possibility open for future missions if the timing works out.