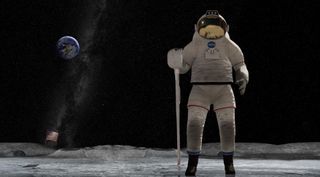 An artist's depiction of an astronaut returning to the moon.
(Image: © NASA)

The next journey to the moon will be far from a solo venture. NASA will have the help of not only international government agencies but also entrepreneurs as it returns to the lunar surface, according to a news report from the International Astronautical Congress in Washington, D.C.

"Public-private partnerships are essential to what we are trying to do," Margaret Kieffer, NASA's director of the Export Control and Interagency Liaison Division, said in a panel Monday (Oct. 21), according to SpaceNews. "Entrepreneurs see the advantage and the economic benefit of putting their own skin in the game."

The panel was sponsored by Space Trust, which describes itself as a nonpartisan social enterprise working to help countries interact peacefully through space initiatives.

The last time NASA landed humans on the moon between 1969 and 1972, the space world looked very different. Only two countries — the United States and the Soviet Union — had human spaceflight programs. Companies worked in space only through government contracts.

But that has changed in recent decades as other countries, such as Japan and China, and countries in the European Union, have developed space expertise. On the private-sector side, some entrepreneurs left large space companies to branch out on their own. Also, a handful of deep-pocketed businesspeople with visions of space exploration, such as Amazon's Jeff Bezos or SpaceX's Elon Musk, founded companies devoted to transporting people and goods in space cheaply and reliably.

The U.S. government sees value in forging these new relationships, not only to benefit from other companies' expertise but also to make the ecosystem of companies stronger through competition, according to SpaceNews. In turn, entities such as the Department of Commerce's Office of Space Commerce are listening closely to feedback from the private sector so that it can better streamline regulations, while ensuring that safety is held to a strict standard.

"We know that giving companies a chance to innovate and compete with one another will bring the best out of everyone," Kevin O'Connell, director of the Office of Space Commerce, said at the same panel. "It doesn't mean we give up on safety and the standards we apply."

The panelists argued that space is becoming even more accessible to countries with fewer resources. That's because more experienced countries, sometimes aided by bigger budgets, are making efforts to be inclusive of people from all around the world.

By bringing in a diversity of viewpoints from many countries, Eric Stallmer, the president of the Commercial Spaceflight Federation, said the industry becomes stronger. "It is imperative to have a global perspective of the peaceful uses of space, as well as working with partners from around the world," he said in the same statement.