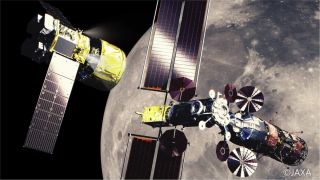 Japan has its eyes on the moon, with two new partnerships designed to advance the country's lunar goals.
(Image: © JAXA)

WASHINGTON — Japan has its eyes on the moon, with two new partnerships designed to advance the country's lunar goals.

The nation signed on as a partner to NASA's Artemis program, although the details of that partnership have not yet been specified. A representative of the Japan Aerospace Exploration Agency (JAXA) also spoke yesterday (Oct. 22) at the International Astronautical Congress held here about a potential partnership with India's space agency on another lunar mission.

"It's not easy to succeed in our mission," Ryo Hirasawa of JAXA said during a presentation. "We decided to go together with ISRO," he added, referring to the agency's Indian counterpart. The two space agencies are embarking on a Phase A study of such a mission's feasibility.

But right now, the pair would aim for a launch around 2023. Japan would provide the rocket and rover, Hirasawa said, while India would provide the lander. The mission would last for about six months and target a constantly sunlit region near the moon's south pole. There, the mission would investigate water, preparing for later missions in which JAXA would like to use ice as rocket fuel.

In particular, the rover would be equipped with a drill that could reach about 5 feet (1.5 meters) into the lunar rock. After drilling, the rover would heat up that material, and by measuring changes in the sample's mass, identify volatiles found in the rock.

Hirasawa also touched on a cubesat lander dubbed OMOTENASHI, which JAXA hopes to launch with NASA's first Artemis mission, according to a full paper submitted to the congress. The cubesat, which would fly in 2020, would be Japan's first lunar lander.

PM Abe: At long last, Japan too will turn over a new page leading to lunar and space exploration.Today, we decided on a policy of participating in the U.S’s challenging new venture, as an ally connected to the U.S. by strong bonds. pic.twitter.com/slYnv0PIHPOctober 18, 2019

The OMOTENASHI project likely makes up part of the cooperation with NASA that the Japanese prime minister's office announced on Twitter on Oct. 18. "The program aims at maintaining a space station orbiting the moon, manned [sic] exploration of the lunar surface and other undertakings, and Mars and other destinations are also in our sights," the minister's office wrote.

The "space station orbiting the moon" is a reference to NASA's planned Gateway, a maneuverable spacecraft in long-term orbit around the moon that would serve as a way station for science experiments and human explorers. (The artist's depiction accompanying the prime minister's office's tweet also references Gateway.)

NASA has been openly recruiting international partners for the Gateway in particular. Canada signed on to provide a robotically operated arm, Canadarm3, that will be the successor of the International Space Station's robotic arm.

In the paper supporting Hirasawa's presentation, he and his co-authors included a graphic for JAXA's vision of international cooperation at the moon. In that diagram, in which only a handful of components include country labels, JAXA is listed as a provider of human landing services that would ferry astronauts from the Gateway to the surface of the moon.