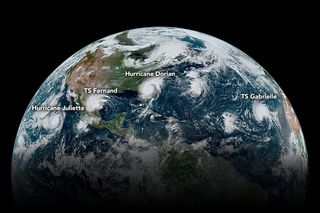 Four tropical cyclones simultaneously churn across the Western Hemisphere in this image captured by the GOES-16 weather satellite in September 2019. Weather forecasting/monitoring is just one of many ways that space tech improves our lives.
(Image: © NASA Earth Observatory/Joshua Stevens/NOAA/NEDIS)

Dylan Taylor is chairman and CEO of Voyager Space Holdings and is the founder of Space for Humanity. He is also co-founding patron of the Commercial Spaceflight Federation. He has been featured in CNBC, Fox Business, Bloomberg News, SpaceNews, ROOM, The Space Review and Apogeo Spatial. He contributed this article to Space.com's Expert Voices: Op-Ed & Insights.

Some people are baffled as to why we spend so much time and money developing spacecraft and technologies that will launch us into space and help us explore distant planets while, at home on Earth, we already have pressing challenges in need of solutions. Each year, we spend billions of dollars on developing space technologies. The 2020 budget for NASA alone is over $20 billion.

Many people may not recognize that the development of space exploration technologies has already helped benefit Earth in many ways, especially when it comes to communications, Earth observation and even fostering economic growth. Space technologies are surprisingly critical in impacting government, industry and personal daily decision-making.

However, with more planetary-wide troubles such as climate change, humanitarian crises, mass migration and others on the horizon, how effectively can we rely on space technologies to sustain our own Earth and life on it?

Related: Earth quiz: Do you really know your planet?

Climate change is altering environments across the globe, causing harsh superstorms and weather patterns that are an ever-increasing threat to the sustainability of life on Earth. However, space satellites can do much more than simply predict daily weather forecasts. Space systems can save thousands of lives from extreme weather each year. Before satellite technology, major disaster incidents like the 1900 Galveston, Texas, hurricane killed from 6,000 to 12,000 people because there were no early-warning systems allowing people to get out of harm's way. NASA's satellite data was the first to reveal a massive hole in the ozone layer over the South Pole. Just over a decade ago, we weren't yet using weather apps or online mapping applications to get to where we're going in efficient ways.

Earth-observation satellites monitor greenhouse gases and other climate indicators, while also allowing us to analyze Earth's ecosystem health more effectively. For example, technologies adapted from space use, like GPS and semiconductor solar cells, have dramatically reduced greenhouse gas emissions. GPS navigation reduces fuel use on sea, land and in the air by up to 15 to 21 percent, which is more than what more efficient engines or fuel changes have offered. Solar photovoltaic power, which was first used by NASA on projects like the International Space Station, has led to massive improvements in solar energy performance. In the future, orbital space power stations could continuously send down clean power day or night through targeted radiation, whatever weather conditions on Earth may be. Free from atmospheric events, solar power would be more efficient than current solar technology. Additionally, sending solar power generation to space would free up land and cultural resources from huge panel arrays, and it would also save landfills from discarded solar panel waste.

Climate change's impact is also harming agriculture production, fisheries management, freshwater sources and forestry. Earth-observation satellites, however, allow us to track, monitor and identify environmentally harmful activities like illegal logging, animal poaching, fires and mining. The closer we monitor these incidents, the better we can offer early and immediate action to help stop these events. Without these systems in place, we would have no way to assess and deal with climate change in a scientific capacity.

Related: The effects of global warming

Not only can using space observations help protect society from climate change, but it can also improve society in the commercial, public health and national safety sectors. World hunger, for instance, is one of the leading humanitarian crises in the world. But satellite imagery can identify crop yield through a magnified view of each pixel, allowing farmers to understand when to water, fertilize and harvest crops. Imaging the land using special spectral bands like near infrared, we can create a vegetation index that represents crop yield productivity. And satellites are uniquely able to capture and collect data on agricultural areas, which make up 37 percent of Earth's landmass.

What's more, big data applications of space technology are instrumental to developing nations, which are especially susceptible to natural disasters due to their limited resources. The United Nations Office for Outer Space Affairs (UNOOSA) even has a platform for space-based information for disaster management and emergency response (UN-SPIDER), which uses big data and satellite technology to respond to natural disasters in African countries. With an increasing amount of data from Earth-observation tech, social media, crowdsourced geolocation, virtual tools and internet access, big data can help generate insights that allow us to make better decisions in emergencies while sticking to sustainability goals.

The future benefits of space activities

In the next 5 to 20 years, we will see a huge transformation in more advanced space technologies. It's expected that satellite megaconstellations, fast point-to-point suborbital transport (which will save on fuel emissions) and asteroid impact prevention (although the technology is still in its infancy) will all make their mark.

Megaconstellations are emerging with great promise. These satellite groups can enhance efficiency, capacity and safety to a variety of Earth-based services and business users in the maritime, energy, banking, government and telecommunications sectors. By using big data, megaconstellations will create more latent, higher-speed internet with increased throughput and global coverage that will benefit billions of everyday internet users. Currently, SpaceX, Amazon, Telesat and Samsung all aim to loft huge satellite networks.

Space technologies are an integral part of our evolution as a society. As we further explore the cosmos, the level of innovation and exploration needed to do so will help inform how we may purposefully integrate and adapt these tools to benefit our lives down on the surface. While we still have a long journey to evolve these technologies, the track record is there that we can use them to enhance our society and ultimately safeguard our planet, too.