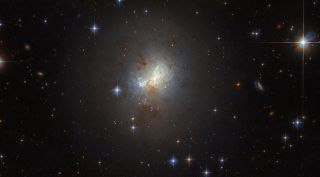 Almost every galaxy in our universe appears to have a giant black hole in its center, including our own Milky Way. The Event Horizon Telescope recently snapped a pic of the one inside of the Virgo Galaxy at a distance of 55 million light-years away. So that’s nice. And once you get over this surprising fact, another one emerges. There's a very peculiar relationship between the mass of the black hole at the center of a galaxy and the properties of the galactic host itself. For example, the bigger the galaxy, the bigger the black hole. But there are a few strange exceptions to this general trend, and astronomers studying these oddities may reveal a crucial link between the evolution of black holes and galaxies.

If you're wondering which came first, the galaxy or its black hole, the answer is: We don't know. At some point in the distant past — about 13 and a half billion years ago when stars first started forming — galaxies and giant black holes appear to have formed at relatively the same time. But whether giant black holes began to germinate within still-young galaxies, or galaxies coalesced around infant black holes, a tight personal relationship was established very quickly.

Astronomers believe that there is regular communication and interaction between giant black holes and their galaxies. The bigger the galaxy, the more stuff there is, and the more stuff there is, the more fuel there is to feed the ever-gaping maw of the giant black hole. But when black holes feed, they become active; gas swirls around with intense energies as it falls into the event horizon. Some of that gas heats up and emits powerful blasts of radiation that escape the vicinity. In other cases, the gas can swirl around the outer edges of the black hole without falling in, forming long jets that extend thousands of light-years into the surrounding medium.

As you can imagine, this is a lot of energy getting dumped into the neighborhood of the black hole. That energy heats up the surrounding gas, and the now-hot gas has very little inclination to sink down into the center where it might risk an encounter with the black hole. With the gas staying safely away, the black hole doesn't get to eat, and so stabilizes in size.

But if the galaxy is able to grow larger, then this can press more gas down to the center, overwhelming any misgivings and giving the black hole a new meal, which is duly accompanied by a new feedback episode that holds the continued growth of the black hole from spiraling out of control.

Except for the ones that don't.

Secrets of the blue nuggets

Some galaxies host extremely large black holes, way outside of the trend set by their brethren. How did these black holes get so big, if the galaxies that host them don't really have enough material to make them that way?

Blue-nugget galaxies are only found very far away, which means that they were a feature of the much younger universe and didn't hang around to the present day. Blue nuggets are, as their name suggests, blue and small. They're relatively tiny galaxies that feature an exceptionally enhanced rate of star formation. Since they're forming stars like crazy, these galaxies tend to form more big, bright-blue stars than average, giving them their namesake color.

The galaxies are able to form stars at such an exceptional rates because, despite their size, they're being fed by nearby streams of gas, which pump material into the undersized galaxy, ramping up its star-formation rate.

But this influx of raw material at such an early age comes at a cost. With all the activity, a massive black hole forms at the center, far larger than you'd expect in such a young galaxy. And that feeding black hole vomits all across the blue nugget galaxy, shutting off further star formation. Because the galaxy is so small, that feedback doesn't just affect the core but the entire thing, essentially terminating the growth of that galaxy at too young an age.

So, the population of stars that was born early on that makes the nugget nice and blue, eventually dies, leaving behind only old, small, dim red stars with very little new activity, converting this galaxy into what's affectionately known as a red nugget. And because of that early burst of activity, it sports an exceptionally large central black hole.

Could this really be the story behind these odd galaxies and their big black holes? We have only a handful of examples of such extreme cases, so without further data it's hard to draw firm conclusions. And yet this story is compelling, and it could provide a clue in the ongoing tale between black holes in their galaxies.

You can read the study, "Supermassive Black Hole Demographics: Evading M−σ," for free at the online preprint site arXiv.

You can listen to the Ask A Spaceman podcast on iTunes and on the Web at http://www.askaspaceman.com. Ask your own question on Twitter using #AskASpaceman or by following Paul @PaulMattSutter and facebook.com/PaulMattSutter. Follow us on Twitter @Spacedotcom or Facebook.