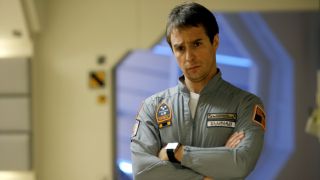 As part of a double anniversary celebration, the modern sci-fi classic "Moon" will be available for the first time on 4K Ultra-HD Blu-ray.

The film, which was written and directed by Duncan Jones, first hit theaters 10 years ago, and the re-release is also timed to coincide with the 50th anniversary of the Apollo 11 moon landing. "Moon" is set in the not-too-distant future, when astronaut Sam Bell (Sam Rockwell) is nearing the end of his three-year contract of harvesting helium-3, a precious energy source, from the far side of the moon.

Bell's only communication with Earth is through the use of prerecorded messages and he is alone except for a computer named GERTY (voiced by Kevin Spacey). Inevitably, isolation begins to take its toll just weeks before he's scheduled to return home, setting in motion a series of events that reveals the terrible truth behind his mission.

"Moon," was a hit with sci-fi fans and critics alike. The Times of the UK review read, "Though it uses impressive sci-fi trappings to tell its story — the fabulous models and moonscapes are recognizably retro yet surprisingly real — this is a film about what it means, and takes, to be human." Rolling Stone ranked the film at No. 23 on their "Top 40 Sci-Fi Movies of the 21st Century" list.

Jones and producer Stuart Fenegan, together founded Liberty Films UK and started their careers by making television commercials and short films. They wrote "Moon" with Sam Rockwell in mind because Jones really wanted to work with him.

The film is a stylish, bare-bones sci-fi drama that undoubtedly proved Jones' worth as an up-and-coming feature film writer and director. One of the outstanding elements of the movie was the production design. To get the look and feel right for a moon base, Jones and Fenegan looked at some of the epic sci-fi movies of the '70s and '80s, including "Alien," "Dark Star," "Silent Running," "2001: A Space Odyssey" and the underrated "Outland."

"One of [Jones'] mates, a concept designer called Gavin Rothery, and I were talking a lot about how it might look if you were mining helium-3 on a moon base, it's a blue-collar job," Fenegan told Space.com. "So your moon base isn't going to be straight out of Apple, it's not going to look like 'Minority Report,' it's not going to be shiny glass and steel or have that 'Star Trek' gloss."

That retro-future aesthetic was largely inspired by "Outland," Fenegan said. "When we were putting the budget together and I was trying to figure out how on earth we could do the lunar rovers and the exteriors, [Jones] suggested model miniatures," he said. "We laughed at first, but then immediately fell in love with the idea, and it became a bit of a design reference. It could feel like a lost '70s sci-fi movie. And I think that worked really well for us."

The story of "Moon" came from Jones' reflections on his own life. "Having been a philosophy student, I was interested in how we change, as a person, as we get older," Jones told Space.com. "I wondered what it would be like for those different versions of ourselves to have the chance to meet up."

Jones and Fenegan are, thankfully, staying with sci-fi for their next project. They're bringing the 2000AD character Rogue Trooper to the big screen for the very first time.

2000AD is a British comic that launched nearly 45 years ago and offers a universe of characters at least as large as both Marvel and DC. During its lifetime, it's had a significant influence on contemporary culture. Prominent writers from 2000AD have also given us "The Watchmen," "Preacher," "Batman: the Killing Joke," "V for Vendetta" and much more.

Back in March, Jones tweeted that his script for the movie is "like 'Guardians of the Galaxy' had a baby with 'The Raid: Redemption.'"

Little self-congratulatory tweet here but... Im writing away on the Rogue Trooper script, and I fuckin' love it! 🥰Action, fun, horror-Like Guardians of the Galaxy had a baby with The Raid.March 5, 2019

Jones may not be done with "Moon" yet, either. A second installment to the story, the acclaimed movie "Mute," came out in 2018. The film is considered a sequel of sorts to "Moon," as they take place in the same universe. And fans are looking forward to a third installment — but it doesn't sound like it will continue where "Moon" left off.

"I think good sequels do exist," Jones said. "But I don't know if 'Moon' is the right movie to try to make the sequel of." Jones said. Instead, he suggested that the final movie in the trilogy will instead be another standalone story set in the same universe.

Or perhaps it won't be a film at all, Jones dangled, explaining that he's considered presenting the story as a computer game instead. Either way, he said, the third part of the trilogy is ready to go.

"It's been written for years, and it's really just a matter of how do we get this thing made," Jones said. "'Moon' was a noir thriller and this third piece is very much a big action movie to finish it all off."

For the new release, "Moon" was remastered in 4K with HDR and remixed with Dolby Atmos audio. The film also includes the original 5.1 theatrical audio mix. It's available to pre-order on Amazon here and will be released on July 16.

Bonus features on the Blu-ray/DVD include: