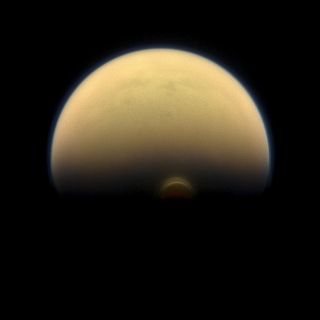 Saturn's moon Titan is the only moon in the solar system with a thick atmosphere.
(Image: © NASA/JPL-Caltech/Space Science Institute)

Saturn's largest moon, Titan, is perhaps one of the most enigmatic bodies in the solar system. I mean, look at what it's got going on: hydrocarbon lakes, frozen icy crust, an atmosphere as thick as a planet's, who-knows-what happening in the core, the works.

To date only one measly probe, the Cassini mission, was sent to investigate the Saturnian system in detail, and it dropped off the Huygens probe for a short-lived and suicidal but scientifically useful mission to the surface of Titan. In the coming decades, both NASA and the European Space Agency are planning audacious missions (involving quadcopters and rovers and other seemingly-sci-fi awesomeness) to study Titan. What do they hope to learn? Read on to find out some of Titan's biggest mysteries.

The moon's thick, heavy, hazy atmosphere is mostly a combination of nitrogen and some methane held at the frigid temperature of minus 290 degrees Fahrenheit (minus 180 degrees Celsius). But despite Titan's extreme distance from the sun, solar radiation still plays an important role. The feeble but incessant ultraviolet (UV) radiation and solar wind output from the sun mess with the methane and nitrogen in the topmost layers of the atmosphere, where the rain in interesting combinations can drizzle down to the surface, causing Titan's characteristic haze.

But the methane and nitrogen aren't alone. Oxygen (along with its molecular friends carbon dioxide and water) also hangs around in the Titanian atmosphere. How much? We don't know, exactly — we just know it's there. What role does it play in the formation of the hazy aerosols that permeate the lower atmosphere? We don't know. How about the transport of heat? Oxygen and co. can absorb UV radiation like a champ and act as a greenhouse gas on the otherwise frigid world. Just how complex does it get over there?

The mysteries don't stop with what the atmosphere is made of. The winds of Titan are dangerously fast, with global speeds reaching 780 mph (1,255 km/h), blasting across the world. How does Titan get the energy needed to sustain such monstrous winds? And if you hate the icy plunge in temperatures due to polar vortices, you won't want to move to this moon, which suffers from the same kind of atmospheric instability as the Earth — caused by some unknown process.

And let's just not even talk about the clouds.

Titan has "sand" dunes. It also has lakes, rivers, streams, and a complete hydrological cycle, though the "hydro" here refers to things like methane and not to things like water. Just like on the Earth, the flowing fluids shape and sculpt and reshape and resculpt the lands underneath them. How extensive are Titan's lakes? How stable are its rivers? How often does it rain? Are there seasonal variations? Is Titan just like a low-temperature Earth, or something even stranger?

Now back to the dunes. The complex molecules that form from largely unknown processes in the atmosphere drift their way down on to the surface as tiny grains, which pile up, as grains tend to do. And here's where that super-fast wind comes into play, driving that "sand" into all the familiar desert landscapes that you might find on a more arid world like Mars. Except these dunes are massive: up to a few kilometers wide and 100 kilometers (62 mile) long. All we know is that the dunes exist, but we don't know what their extent is and what their relationship is with the winds. It's complex.

Titan also has craters. The more craters a world has, the older its surface. But Titan also has processes (like wind and rain) that can erode surfaces, making them younger. So just how old is the surface of Titan?

Below the surface, it gets even stranger, as Titan is likely host to a globe-spanning liquid water ocean buried underneath its icy exterior. If Titan has active "cryovolcanoes" (like a volcano but made of ice and water), then there might be a complete system capable of transporting molecules from the top of the atmosphere all the way to bedrock, and back. And if Titan is tectonically active to boot, even more interesting chemistry can happen, which opens up the door for perhaps the most intriguing question of all…

Titan: A home for life?

Is there something alive on Titan? If life has found a foothold here, it would be radically different than life on Earth — operating at temperatures any reasonable Earth-bound critter would find inhospitable, reveling in the chokingly thick hydrocarbon atmosphere. There's liquid water, but it's underground. On the surface, there's the liquid methane and other hydrocarbons — could life there use that as a solvent instead of the more familiar water? Or is life only possible with the good ol' H20?

But life needs more than water (or hydrocarbons). A proper lifeform is a big ol' bag of rich organic molecules. But many of these molecules are produced in the upper atmosphere (somehow) or possibly at the bottom of the oceans (somehow). How much of these vital ingredients make their way to the oceans (any of them) where they can go from mere building blocks to actually building life? Who knows.

Maybe there's life both in the subsurface oceans and the surface ones. Maybe they hate each other and are constantly in slow-motion war. Maybe I'm getting ahead of myself. Let's get to Titan and find out.