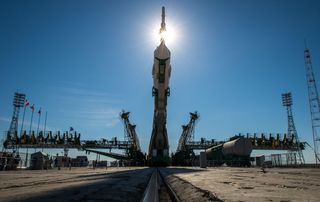 Site No. 1 at the Baikonur Cosmodrome in Kazakhstan has launched rockets since 1957. It is currently the launch site for all space station crewmembers.
(Image: © NASA/Bill Ingalls)

Russia may soon decommission its most historic launch site, from which the world's first satellite, Sputnik, was lofted into space.

Site No. 1, also known as Gagarin's Start, is located in Baikonur, Kazakhstan. Sputnik was the first spacecraft to lift off from this site in October 1957, followed by the first human spaceflight mission in April 1961 by Soviet cosmonaut Yuri Gagarin.

Many other historic missions have also launched from Site No. 1, including Soviet cosmonaut Valentina Tereshkova, who became the first woman to fly to space in June 1963, as well as Scott Kelly's record-breaking stay aboard the International Space Station.

Today, Site No. 1 is still used to launch all Russian, American, Canadian, European and Japanese astronauts into space. However, that soon may change, Ars Technica reported.

Reports suggest the launch site will be decommissioned due to a lack of funding for upgrades needed to launch the Soyuz 2 rocket. Site No. 1 was already reconfigured for launches of the Soyuz FG rocket, which was introduced in 2001 and is used today to fly crews to the space station.

However, cargo launches have already moved to the new Soyuz 2 rocket and it's expected that crew launches will move to the newer rocket, too, according to Ars Technica, based on a report by RIA Novosti.