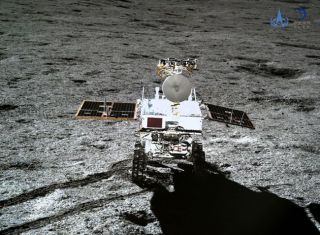 The first country to land a spacecraft on the moon and the only country to do so since the 1970s are teaming up for a lunar return.

In 1966, the Soviet Union made the first soft lunar landing during the Luna 9 mission, which sent the first images from the surface of the moon back to Earth. The country spent a decade exploring the lunar surface but hasn't been back since 1976.

Now, Russia is partnering with modern lunar powerhouse China, the only country to successfully land softly on the moon within the past decade or four. In January, as part of China's current moon mission, the country's Chang'e 4 lander and Yutu 2 rover became the first robots to operate on the far side of the moon.

China has sketched out an ambitious lunar plan, with four future missions under discussion.

Chang'e 5 will launch in the next year and is designed to be China's first sample-return mission. Chang'e 6 will fetch a sample from the lunar south pole in 2023, and Chang'e 7 will explore that region in detail. Another mission will begin progress on China's long-term goal of establishing a science base on the moon.

Russia's lunar plans are running on a different schedule to account for the country's long hiatus in moon visits. The head of the Roscosmos space agency, Dmitry Rogozin, recently walked through those plans, citing a 2024 orbiter, a 2028 sample-return mission, and human flights in 2029 or 2030.

And on Sept. 17, Rogozin and his Chinese counterpart, Zhang Kejian, agreed to work together on lunar projects, according to a statement from Roscosmos. They plan to build a shared data center, with one outpost in each country, for lunar and deep-space research.

They also agreed that China's Chang'e 7 lander and a Russian orbiter called Luna 26 should work together, with Luna 26 helping Chang'e 7 find a safe landing site. Each spacecraft may also carry scientific instruments from the other country, assuming scientific analysis proves that would be beneficial.

So far, China has a flawless record at the moon, beginning with its 2007 mission, Chang'e 1. Russia, on the other hand, has struggled recently with hiccups in its human spaceflight program, the only way astronauts can currently reach the International Space Station.

Last fall, a small-but-much-publicized hole in a docked Soyuz capsule prompted continuing speculation, and a rocket anomaly during a crew launch sent two astronauts plummeting back to Earth. Last month, the first-ever uncrewed Soyuz capsule struggled to dock autonomously at the station.