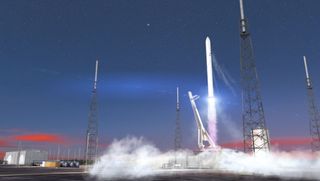 Relativity Space, a company that builds and lofts 3D-printed rockets, will launch a half-dozen missions for the in-orbit shuttle service company Momentus beginning in 2021.

Relativity Space unveiled the launch service agreement on Sept. 11 at the 2019 World Satellite Business Week in Paris. According to statements from both companies, the agreement calls for a first Momentus launch in 2021 using Relativity's Terran 1 rocket, with options for five more flights.

According to the agreement, Relativity's Terran 1 rocket — "the world's first and only entirely 3D-printed rocket," according to company officials — would carry Momentus' Vigoride service vehicle into space. That vehicle is designed to ferry small and medium-sized satellites from low Earth orbit (LEO) into their final geosynchronous orbit around Earth using a water plasma propulsion system. This technology could provide more flexibility for satellites launching on ride-share missions, because otherwise, satellites that launch together have to enter similar orbits.

According to the Momentus website, Vigoride can move satellites from below the orbit of the space station, about 220 miles (350 kilometers) above the Earth, all the way up to an altitude of 1,243 miles (2,000 km).

"With Momentus' innovations ... we look forward to working together to expand Terran 1's flexibility and offering beyond LEO, offering small and medium satellite launch opportunities with industry-defining lead time, flexibility and cost," Relativity Space CEO Tim Ellis said in the statement. "This partnership will enable us to build the space economy faster and accelerate the future of humanity in space."

Relativity Space is positioning itself to be an important player in the future of spaceflight. The company has agreements with NASA's Stennis Space Center in Mississippi for a nine-year lease on a 220,000-square-foot (20,438 square meters) factory and exclusive use of the 25-acre (10 hectares) E4 Test Complex at the NASA facility. Relativity Space's's expanding workforce includes a former executive at SpaceX and Virgin Orbit. The startup also has contracts with Thai startup mu Space and Canadian satellite communications company Telesat.