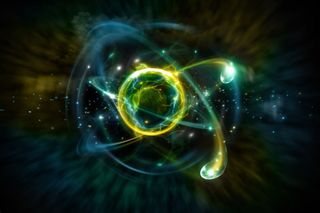 The strong nuclear force is, as you might have guessed, a very strong force indeed. It's so powerful that it's able to pull together some of the tiniest particles in the universe for very long periods, possibly forever. Particles bound by the strong force form the building blocks of our everyday world: protons and neutrons. But if you were to cut open a proton or neutron, you wouldn't find a nice, simple arrangement of subatomic particles. Instead you would see the disgusting innards of perhaps one of the most complex forces in the universe.

Protons and neutrons aren't the only things that the strong force is able to make, but we don't really understand the other more complex and exotic arrangements. What's more, even our observations and experiments are themselves very sketchy. But physicists are hard at work trying to piece together insights into this fundamental force of nature.

Another particle, the light particle (also known as the photon), does the work of transmitting electromagnetic force from one charged particle to another. The photon itself doesn't have its own electric charge, and is massless. It travels at the speed of light, flicking back and forth across the universe, making electromagnetism happen.

The quarks can have one of three colors, called red, green and blue. Just to clarify, they're not actual colors, but just labels that we give to this strange, charge-like property.

So, quarks feel the strong force, but it's carried by a whole slew of other particles — eight, to be precise. They're called the gluons, and they do a really great job of…wait for it…gluing quarks together. The gluons also happen to have the ability and desire to carry their own color charge. And they have mass.

Six quarks, eight gluons. The quarks can change their color charge, and the gluons can too, because why not.

All this means that the strong nuclear force is far more complex and intricate than its electromagnetic cousin.

Okay, I lied. Physicists didn't just call this property of quarks and gluons "the color charge" because they felt like it, but because it serves as a useful analogy. Gluons and quarks can bind together to form bigger particles as long as all the colors add up to white, just as red, blue and green light add up to white light. . The most common combination is three quarks, one each of red, green, and blue. But the analogy gets a little tricky here, because each individual quark can have any of the colors assigned to it at any moment in time; what matters is the number of quarks to get the right combinations. So you can have groups of three quarks to make the familiar protons and neutrons. You can also have a quark bind with its anti-quark, where the color cancels out with itself (as in, green pairs with anti-green, and no I'm not just making this up as I go along), to make a kind of particle known as a meson.

But it doesn't end there.

Theoretically, any combination of quarks and gluons that add up to white are technically allowable in nature.

For example, two mesons — each with two quarks inside of them — can potentially bind together into something called a tetraquark. And in some cases, you can add a fifth quark to the mix, still balancing all the colors, called (you guessed it) a pentaquark.

The tetraquark doesn't even have to be technically bound together in a single particle. They can simply exist nearby each other, making what's called a hydronic molecule.

And how crazy is this: The gluons themselves may not even need a quark to make a particle. There can simply be a ball of gluons hanging out, relatively stable in the universe. They're called glueballs. The range of all possible bound states allowable by the strong nuclear force is called the quarkonium spectrum, and that is not a name made up by a Sci-Fi TV show writer. There are all sorts of crazy potential combinations of quarks and gluons that just might exist.

Physicists have been running strong nuclear force experiments for quite a few decades now, like the Baber Experiment and a few at the Large Hadron Collider, slowly over the years building up to higher energy levels to probe deeper and deeper into the quarkonium spectrum (and yes you do have my permission to use that phrase in any sentence or casual conversation you want, it's that awesome). In these experiments, physicists have found many exotic collections of quarks and gluons. The experimentalists give them funky names, like χc2(3930).

These exotic potential particles only exist fleetingly, but do in many cases conclusively exist. But physicists have a hard time connecting these briefly-produced particles to the theoretical ones we suspect should exist, like the tetraquarks and the glueballs.

The problem with making the connection is that the math is really hard. Unlike the electromagnetic force, it's very difficult to make solid predictions involving strong nuclear force. It's not just because of the complicated interactions between the quarks and the gluons. At very high energies, the strength of the strong nuclear force actually begins to weaken, allowing the math to simplify. But at lower energies, like the energy needed to bind together quarks and gluons to make stable particles, the strong nuclear force is actually, well, very strong. This increased strength makes the math harder to figure out.

Theoretical physicists have come up with a bunch of techniques to tackle this problem, but the techniques themselves are either incomplete or inefficient. While we know that some of these exotic states in the quarkonium spectrum exist, it's very difficult to predict their properties and experimental signatures.

Still, physicists are working hard, as they always do. Slowly, over time, we are building up our collection of exotic particles produced in colliders, and making better and better predictions about what the theoretical quarkonium states should look like. Matches are slowly coming together, giving us a more complete picture of this strange but fundamental force in our universe.