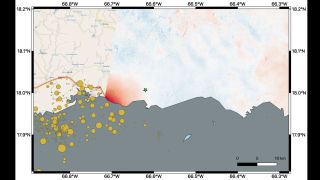 This map shows ground changes, or displacement, on the eastern two-thirds of Puerto Rico following the 6.4-magnitude earthquake of Jan. 7, 2020. Areas of displacement are shown in red, with greater displacement by darker shades. The ground shifted up to 5.5 inches (14 centimeters) in a downward and slightly west direction. The orange circles show the cluster of quakes of aftershocks that have hit the island recently.
(Image: © NASA/JPL-Caltech, ESA, USGS)

The swarm of earthquakes that have rocked Puerto Rico recently left marks that are visible from space.

About 2,000 quakes have shaken Puerto Rico since late December, with the most powerful a 6.4-magnitude temblor that took place last Tuesday (Jan. 7), centered just off the island's southwest coast. That one, the biggest quake to hit Puerto Rico in a century, killed at least one person, damaged nearly 600 buildings and caused at least $110 million in damage, Reuters reported.

"The scientists found that the greatest displacement from the [satellite's] flyover area occurred west of the city of Ponce (identified by the green star), not far from the quake's offshore epicenter," NASA officials wrote in a statement on Friday (Jan. 10).

"They recorded up to 5.5 inches (14 centimeters) of ground change there," they added. "The ground appeared to shift downward and slightly to the west."

As it commonly does after natural disasters, NASA is making its data and scientific expertise available to aid response and recovery efforts in Puerto Rico.

"Products in the process of being produced include Suomi-NPP-based 'Black Marble' power outage maps, damage maps, and landslide maps," NASA officials wrote in the same statement, referring to the Suomi National Polar-orbiting Partnership satellite, a joint project of NASA, the U.S. National Oceanic and Atmospheric Administration and the Department of Defense.

The USGS is providing regular updates about the Puerto Rico earthquakes, including aftershock forecasts. You can find that information here.