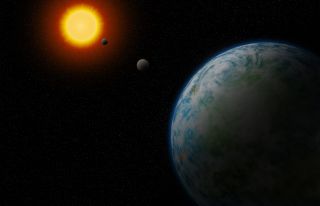 An artist’s illustration of the newfound exoplanet GJ180 d, which is the nearest temperate super-Earth to us that is not tidally locked to its star, making it more likely to be able to host life.
(Image: © Robin Dienel, courtesy of the Carnegie Institution for Science)

Astronomers have found two more potentially life-supporting alien planets in our neck of the cosmic woods, as well as a weird and record-setting "cold Neptune."

The two possibly habitable worlds orbit the red dwarf stars GJ229A and GJ180, which lie about 19 light-years and 39 light-years from Earth, respectively. That's not far in the grand scheme of things, considering that our Milky Way galaxy's famous disk is about 100,000 light-years wide. (The sun's nearest neighbor star, Proxima Centauri, is about 4.2 light-years away.)

Red dwarfs, which make up about 70% of the Milky Way's stellar population, are significantly smaller and dimmer than the sun. So, these stars' "habitable zones" — the range of orbital distances where liquid water could be stable on a world's surface — lie much closer in than they do in sunlike systems.

Indeed, habitable-zone red dwarf planets tend to be tidally locked, always showing the same face to their star, just as Earth's moon always shows us its "near side." Tidal locking isn't a great thing for habitability, because it can leave a world with a scorching dayside and a frigid nightside (though a thick atmosphere can distribute heat globally and mitigate the extreme temperatures).

But the newfound planets around GJ180 and GJ229A — known as GJ180 d and GJ229A c, respectively — orbit far enough away to avoid tidal locking, discovery team members said. And that makes GJ180 d a record-breaking world.

“GJ180 d is the nearest temperate super-Earth to us that is not tidally locked to its star, which probably boosts its likelihood of being able to host and sustain life," team leader Fabo Feng, of the Carnegie Institution for Science in Washington, D.C., said in a statement.

As Feng said, GJ180 d is a super-Earth, a world slightly bigger than our own; the newfound exoplanet's mass is at least 7.5 times that of Earth, the researchers determined. GJ229A c is a super-Earth, too, harboring at least 7.9 Earth masses. GJ180 d completes one orbit every 106 Earth days, and GJ229A c does the same every 122 Earth days, the scientists reported in a study announcing the finds, which was published last week in The Astrophysical Journal Supplement Series.

GJ229A c resides in a binary system consisting of a red dwarf and a brown dwarf (which is called GJ229B). Brown dwarfs are curious objects bigger than gas-giant planets but too small to undergo fusion reactions in their core. This explains another name for them: "failed stars."

As GJ180 d's name indicates, it's not the only known world in its system. Astronomers had previously discovered two planets circling that red dwarf, GJ180 b and GJ180 c.

Astronomers don't know much about the two newfound super-Earths, but they could learn more soon. The planets' relative proximity to our own solar system makes them good targets for study by powerful future instruments such as NASA's James Webb Space Telescope, which is scheduled to launch next year, the researchers said.

"Our discovery adds to the list of planets that can potentially be directly imaged by the next generation of telescopes," Feng said. "Ultimately, we are working toward the goal of being able to determine if planets orbiting nearby stars host life."

"We eventually want to build a map of all of the planets orbiting the nearest stars to our own solar system, especially those that are potentially habitable," study co-author Jeff Crane, also of the Carnegie Institution, said in the same statement.

The newly discovered "cold Neptune," GJ 433 d, doesn't seem like a good candidate for life, but it's interesting for other reasons. The planet, which is at least 4.9 times more massive than Earth, orbits a dim red dwarf just 29.5 light-years from Earth.

The alien world is also a good candidate for follow-up study, including direct imaging, Feng and colleagues said.

The researchers made the new discoveries after reanalyzing data gathered by the European Southern Observatory's (ESO) Ultraviolet and Visual Echelle Spectrograph (UVES) instrument during a survey of 33 nearby red dwarfs from 2000 to 2007. These were radial-velocity measurements — observations that can reveal stellar motion caused by the gravitational tugs of orbiting planets.

The team supplemented the UVES data with measurements made by three other instruments: the Carnegie Planet Finder Spectrograph (PFS) at Las Campanas Observatory in Chile, ESO's High Accuracy Radial velocity Planet Searcher (HARPS) at La Silla Observatory in Chile and the High Resolution Echelle Spectrometer (HIRES) at the Keck Observatory in Hawaii.

This work resulted in a total of five newfound alien planets, as well as eight unconfirmed exoplanet candidates.

The new study is part of a flood of exoplanet data that began pouring in a decade ago with the launch of NASA's recently deceased Kepler space telescope (which hunted alien worlds using the "transit method," a strategy that's different from the radial-velocity technique employed by UVES, HARPS, HIRES and PFS). Astronomers have confirmed more than 4,100 exoplanets to date, and about 70% are Kepler finds.