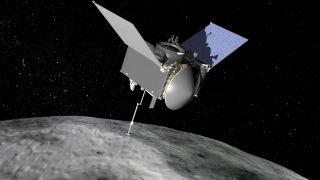 An artist's concept of NASA's OSIRIS-REx asteroid sampling spacecraft at the asteroid Bennu. The probe is due to return samples to Earth in 2023. Today (Nov. 12, 2019), NASA announced the four potential landing sites for the craft to touch down at.
(Image: © NASA)

NASA's OSIRIS-REx spacecraft will "tag" asteroid Bennu at one of four potential sites next year.

Bennu's rocky surface poses a number of unique challenges for OSIRIS-REx, which launched to the far-off asteroid in 2016 to collect a sample and return it to Earth as the first U.S. craft to do so. Touching down on the asteroid's surface to grab that sample is no easy feat. The diamond-shaped asteroid has an uneven surface covered in boulders that will make it challenging for the craft's robotic arm, named TAGSAM, to safely pick up a sample.

In addition to ensuring that the robotic arm will be able to touch down on the asteroid without sustaining any damage, the samples collected from the site should ideally also be interesting to study and also small enough for TAGSAM to actually pick up. The craft's robotic arm operates in a unique way in which, to "pick up" a sample, it emits a burst of nitrogen gas to kick up loose dust and rocks, and then the sampler head at the end of the arm collects the debris. So, the material at the site has to be conducive to this mechanism.

With these challenges and goals in mind, today, NASA announced the four potential sites that OSIRIS-REx might touch down on. Mission managers aim to narrow this list down to two semifinalists by July, 2020 and, if all goes according to plan, the spacecraft will touch down shortly after this.

Below, see photos of the four sites NASA is eyeing for OSIRIS-REx's touchdown at asteroid Bennu next year.

The first possible landing site is called Nightingale. It's the northernmost site and sits at 56 degrees north latitude on Bennu. "The site contains mostly fine-grained, dark material and has the lowest albedo, or reflection, and surface temperature of the four sites," NASA's Goddard Space Flight Center said about the site on Twitter.

The second possible site is known as Kingfisher. It's situated near the asteroid's equator in a small crater with a diameter of 26 feet (8 meters). "Kingfisher is surrounded by boulders, but the site itself, with a radius of 16 ft (5 m), is free of large rocks," NASA Goddard said on Twitter.

The third site, Osprey, is also near Bennu's equator in a small crater. The crater at the Osprey site has a 66-foot (20 m) diameter.

The fourth and final site is called Sandpiper, and it's located in Bennu's southern hemisphere. It's "on the southeast floor of a large crater with a radius of 103 ft (31.5 m)," NASA Goddard shared on Twitter. "The site itself is a relatively flat area with a 16 ft (5 m) radius."

The time is upon us! The annual OSIRIS-REx commemorative poster is here. This one shines a light on sample site selection — happening in December. Get your own printable version (PDF file): https://t.co/CqEzTtItsF pic.twitter.com/uPgofEBsKcNovember 12, 2019

To commemorate the selection site process and these four potential sites, NASA dedicated their annual commemorative OSIRIS-REx poster to sample site selection. If you're excited about site selection, the spacecraft's incredible journey to Bennu or even the general concept of sample return missions, you can get a free printable PDF of the poster here.