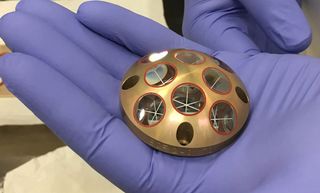 A "microreflector" retroreflector that is currently on its way to the lunar surface.
(Image: © NASA/GSFC)

An Indian spacecraft is carrying the first reflectors to be left on the moon since the Apollo era.

The reflectors, which are part of the Indian Space Research Organization's (ISRO) Chandrayaan-2 mission that launched earlier this week, represent the next step in an experiment that began in 1969.

Fifty years (and a few days) ago, the Apollo 11 astronauts left the Lunar Laser Ranging experiment on the moon. The experiment contained a tray of 100 small prisms that scientists on Earth would shoot with laser beams. Astronauts on Apollo 14 and 15 followed suit, leaving more of these prisms, known as retroreflectors, on the moon. Incredibly, decades later, these reflectors remain active experiments.

Lasers and the moon

ISRO launched a tiny new retroreflector to the moon's south pole on board Chandrayaan-2's Vikram lander. It weighs only 1 ounce (about 22 grams) and can be seen from lunar orbit, but not from Earth, Simone Dell'Agnello, an Executive Technologist at the National Institute for Nuclear Physics - Frascati National Labs in Italy, told Space.com in an email.

The new reflector is "a 'microreflector' device, similar to the one delivered by INFN of Italy (through the Italian Space Agency, ASI) to NASA-JPL and deployed on the InSight Mars lander (and to be deployed by the Mars 2020 rover of NASA and by the ExoMars 2020 rover of ESA)," she said.

Dell'Agnello is leading the research team on the Vikram microreflector and is a co-investigator working on the upcoming Next Generation Lunar Reflector (NGLR)  for NASA's Artemis program. The "next-gen retroreflectors are much more compact and lighter than Apollo's meter-size arrays deployed by Apollo 11, 14 and 15 astronauts," Dell'Agnello added.

Doug Currie, a senior research scientist and professor at the University of Maryland who was a key member of the team that designed the original Apollo reflectors, told Space.com that Virkam's microreflector will not be observed by lunar laser stations on Earth. Instead, lasers fired from a satellite will bounce off this small reflector, telling scientists the distance between the satellite and the microreflector on the lunar surface.

The microreflector is "designed to be measured by Martian and lunar orbiters equipped with lasers (like the Lunar Reconnaissance Orbiter, the Mars Global Surveyor and any future such spacecrafts)," Dell'Agnello said.

By firing lasers at existing reflectors on the moon, scientists on Earth observe the time it takes for the laser to return and can then study the distance between the moon and Earth. This helps scientists measure and analyze the moon's orbit, rotation, orientation and relationship with Earth.

So far, the laser reflector experiments Apollo astronauts left on the moon have not only improved scientists' understanding of how the moon moves and how far we are from it, but also helped to provide evidence that the moon has a liquid core.

However, while these decades-old experiments continue to function and provide scientists with accurate and useful data, the reflectors will soon be getting an upgrade. Enter the NGLR, a next generation laser experiment led by Currie and Dell'Agnello.

NGLR works similarly to its reflector predecessors, bouncing back lasers fired from Earth. With improved reflectors and a greater number of reflectors over a larger area on the moon, the team hopes that it will be much more accurate than the Apollo reflectors, according to a statement from the University of Maryland.

It is one of 12 investigations that NASA has selected for study and exploration of the moon as part of the agency's Artemis lunar program.

The experiments and demonstrations "will help the agency send astronauts to the Moon by 2024 as a way to prepare to send humans to Mars for the first time," NASA officials said in a statement.

"Our Next Generation Lunar Retroreflector is a 21st-century version of the instruments currently on the moon," Currie said in the statement. "Each placement of a Next Generation lunar laser ranging array will greatly enhance the scientific and navigational capabilities of retroreflector network. These additions improve the mapping and navigation capabilities important for NASA's plans to return to the moon and by 2028 establish a sustained human presence."

The reflectors will help scientists to investigate other areas of science as well. For example, scientists will use the reflectors to conduct new tests regarding general relativity and related theories, which may help to reveal more about dark matter, the mysterious stuff that makes up almost 27% of the universe, Currie said.

"Plus," Dell’Agnello added, "laser retroreflectors will serve surface geodesy, lunar cartography, exploration, ISRU and various forms of future lunar (and/or martian) commerce that will need surface metric measurements. Applications that already happened on Earth since the dawn of urbanization."

Editor's Note: An earlier version of this article incorrectly referred to the NGLR as a "microreflector." The microreflector is on Vikram, the NGLR is a separate reflector that will be part of a future mission.