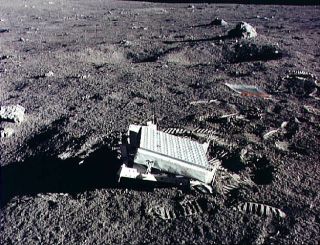 Apollo 11 astronauts left this retroreflector on the lunar surface in 1969.
(Image: © NASA)

An epic lunar laser experiment is still going strong, five decades after the Apollo astronauts set it up on the surface.

The moonwalking crew of Apollo 11, which landed on the moon 50 years ago this month, put special retroreflectors on the lunar surface, as did the later crews of Apollo 14 and 15, in 1971. (Another retroreflector, built by the French, sits on the Soviet Lunokhod 2 rover that landed without a crew in 1973.)

The NASA experiment, called the laser ranging retroreflector, is "a special type of mirror with the property of always reflecting an incoming light beam back in the direction it came from," explained the Lunar and Planetary Institute (LPI) in a statement. And the reflector is key for measuring the distance between the Earth and the moon, the institute added.

The way it works is an observatory — quite often the McDonald Observatory in Texas, although many others have participated — shoots a laser beam at the moon. "They remain tightly focused for large distances," the institute explained, although there is some dispersion. By the time the beam bounces off the mirror and returns to Earth, it has widened to about 12 miles (20 kilometers) in diameter. This beam dispersion makes it more difficult to view the reflection.

The reflector itself doesn't require any power, which is why it's still operating decades after other instruments on the moon fell silent. This instrument includes 100 "corner cubes" (or fused silica half-cubes), which are placed in an 18-inch-square (46 centimeters square) aluminum panel, according to NASA's Jet Propulsion Laboratory (JPL). It's due to the shape of these corner cubes that any laser shot at them reflects light directly back. Over the years, measurements of the moon's distance have improved thanks to better laser and computing equipment.

"Once the laser beam hits a reflector, scientists at the observatories use sensitive filtering and amplification equipment to detect any return signal," JPL said. "The reflected light is too weak to be seen with the human eye, but under good conditions, one photon, the fundamental particle of light, will be received every few seconds."

Observations must be made over several hours to account for the weak signal. But by averaging out the signal, researchers can calculate the moon's distance down to a precision of less than 1 inch (2 cm), JPL said. That's not a bad margin of error given that the moon's distance averages 238,855 miles (384,400 km) from our planet, or about 30 Earth diameters away from us. It's a distance so vast that it took Apollo astronauts three days to get there.

While the experiment is most famous for its measurements of lunar distance, researchers have also used the data to show that the moon has a fluid core and that the natural satellite is moving slowly away from Earth, said James Williams, a scientist at NASA's Jet Propulsion Laboratory involved in the experiment, in a 2009 Space.com interview.

The timing of the laser round trip provided evidence supporting Albert Einstein's theory of general relativity. That theory says, in part, that the speed of light in a vacuum is independent of any observer's motion. This experiment also showed that Isaac Newton's gravitational constant is extremely constant, changing by less than 1 part in 100 billion between 1969 and 2004, NASA stated.