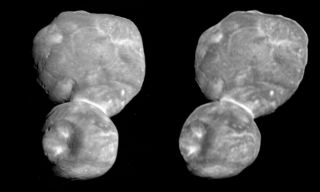 To make this image appear in 3D, stare "through" the computer screen and then focus on the ghostly image that should pop up between the two halves of this picture.
(Image: © NASA/Johns Hopkins University Applied Physics Laboratory/Southwest Research Institute/National Optical Astronomy Observatory)

The New Horizons spacecraft is speeding away from its recent flyby target, a distant icy space rock nicknamed Ultima Thule, but the view from Earth is only getting better.

The mission team has released a new 3D image based on photographs the New Horizons spacecraft snapped while it was as close as 4,100 miles (6,600 kilometers) to the Kuiper Belt object, which is officially known as 2014 MU69. The images are part of the team's continuing work to better understand the object and how it may have formed.

"These views provide a clearer picture of Ultima Thule's overall shape," New Horizons principal investigator Alan Stern, a planetary scientist at the Southwest Research Institute in Colorado, said in a statement, "including the flattened shape of the large lobe, as well as the shape of individual topographic features such as the 'neck' connecting the two lobes, the large depression on the smaller lobe, and hills and valleys on the larger lobe."

To fully appreciate the 3D nature of the images, you'll need to track down a pair of red-blue 3D glasses or prepare for some eyeball gymnastics. (In addition to the options available here, there's a version tailored to those who can cross their eyes available on NASA's website.)

Although the New Horizons spacecraft completed its flyby in the wee hours of Jan. 1, the probe will need about 20 months to transmit all of its data back to Earth and the scientists who are eagerly awaiting it.