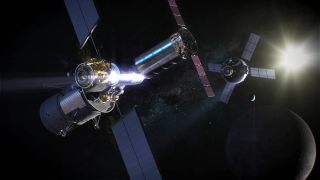 NASA has issued a request for proposals for American companies to design spacecraft that will deliver supplies to the lunar Gateway. This effort will support the agency's Artemis program.
(Image: © NASA)

NASA is looking for ideas from private companies to deliver supplies to its proposed Gateway outpost around the moon, the flagship station for the agency's Artemis program to return to the lunar surface,

Under the Artemis program, NASA aims to land the first woman and next man on the moon by 2024. The initiative includes a number of individual efforts, including the creation of the Lunar Orbital Platform-Gateway, or lunar Gateway. This station will orbit around the moon 250,000 miles (402,000 km) from Earth and allow for supplies to be more readily available for astronauts who may be on the lunar surface.

NASA is now looking for proposals from American companies to create spacecraft that can carry and deliver pressurized and unpressurized cargo to the lunar Gateway. The craft will have to launch on a commercial rocket and be able to perform six months of docked operations at the Gateway, which will be followed by autonomous disposal.

"Working with industry to deliver supplies necessary to support our lunar missions is a critical step to accelerate our return to the Moon under the Artemis program including meeting that bold goal to land the next American astronauts on the Moon by 2024,” NASA Administrator Jim Bridenstine said in a statement.

“This solicitation builds on the capabilities NASA pioneered in low-Earth orbit with commercial cargo resupply to the International Space Station and is the next step in commercialization of deep space. We look forward to industry’s response to our latest solicitation," he said.

This request for proposals is another step forward for NASA's commercial partnerships. The agency previously put out a call for companies to come up with ideas for landing payloads on the lunar surface and develop new technologies for future crewed lunar missions.

A winning proposal would win an indefinite delivery/indefinite quantity 15-year contract with a maximum value of $7 billion. The contract would guarantee a minimum of two missions, and might be followed by future contract opportunities.

NASA is looking for companies submitting proposals to create spacecraft that will consider logistic spacecraft design, cargo mass capability, pressurized volume, power for payloads, and transit time to the Gateway.

"We chose to minimize spacecraft requirements on industry to allow for commercial innovation, but we are asking industry to propose their best solutions for delivering cargo and enabling our deep space supply chain,” Mark Wiese, NASA’s Gateway logistics element manager at Kennedy Space Center, said in the same statement.