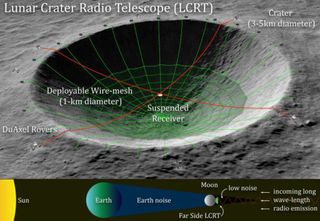 The proposed telescope would be a 1km-diameter wire-mesh that can gaze out into the cosmos without being hindered by the Earth's atmosphere.
(Image: © © Saptarshi Bandyopadhyay)

NASA is funding an early-stage proposal to build a meshed telescope inside a crater on the far side of the moon, according to Vice.

This "dark side" is the face of the moon that is permanently positioned away from Earth, and as such it offers a rare view of the dark cosmos, unhindered by radio interference from humans and our by our planet's thick atmosphere.

The ultra-long-wavelength radio telescope, would be called the "Lunar Crater Radio Telescope" and would have "tremendous" advantages compared to telescopes on our planet, the idea's founder Saptarshi Bandyopadhyay, a robotics technologist at NASA's Jet Propulsion Laboratory wrote in a proposal.

Related: 10 interesting places in the solar system we'd like to visit

NASA's Innovative Advanced Concepts Program is awarding $125,000 for a Phase 1 study to understand the feasibility of such a telescope, Bandyopadhyay told Vice.

The telescope — designed as a wire mesh — would be deployed into a 2- to 3-mile-wide (3 to 5 kilometers) crater on the moon's far side. The 0.62-mile-diameter (1 km) wire-mesh telescope would be stretched across the crater by NASA's DuAxel Rovers, or wall-climbing robots, according to the proposal summary.

Because this telescope would be on the far side of the moon, it would avoid radio interference from Earth, satellites and even the sun's radio-noise during the lunar night. It would also let us gaze out into the cosmos without the veil of Earth's atmosphere.

The atmosphere reflects low-frequency wavelengths of light greater than 32.8 feet (10 meters), essentially blocking them from reaching ground-based telescopes. The telescope "could enable tremendous scientific discoveries in the field of cosmology by observing the early universe in the 10– 50m wavelength band...which has not been explored by humans till-date," Bandyopadhyay wrote.

Editor's Note: This story was updated on April 14 at 1:50 pm to clarify a statement about the radio-noise from the sun.