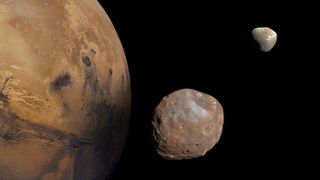 Mars and its two moons, Phobos and Deimos.
(Image: © NASA/JPL/University of Arizona)

NASA has selected eight new research teams to study the moon, near-Earth asteroids and the Martian moons Phobos and Deimos.

The Solar System Exploration Research Virtual Institute (SSERVI) will support the new research teams for five years. The teams will receive a combined total of about $10.5 million per year, funded by NASA's Science and Human Exploration and Operations mission directorates, according to a statement from the space agency.

"SSERVI continues to strengthen the collaboration between exploration and science as we prepare to go forward to the moon with a new era of human exploration," Marshall Smith, director of Human Lunar Exploration Programs within NASA's Human Exploration and Operations Mission Directorate, said in the statement.

Several of the new projects will focus on the regolith, or dirt, of the moon; asteroids; and other objects. That includes projects like the Center for Lunar and Asteroid Surface Science, based at the University of Central Florida in Orlando. That team hopes its work will help scientists develop better mimics of these materials to use in research here on Earth.

A second regolith project, called Geophysical Exploration of the Dynamics and Evolution of the Solar System and based at the University of Maryland, will study geologic features on Earth to better understand what human explorers will find on the surface of other worlds, including the two moons of Mars.

But understanding regolith isn't just about the material itself. The Remote, In Situ, and Synchrotron Studies for Science and Exploration 2 team, based at Stony Brook University in New York, wants to understand how planetary environments may impact human health during surface missions and so will study the chemical reactivity of regolith.

In addition, the Resource Exploration and Science of OUR Cosmic Environment, based at NASA's Ames Research Center in California, will investigate the quantity and availability of resources on the moon. Determining what volatiles are available on the moon will help engineers better understand the processes needed to extract and use lunar resources for future missions, according to the statement.

To ensure the success of future space missions, the Lunar Environment and Dynamics for Exploration Research team will study how the space environment impacts robotic equipment and human assets. This team, based at NASA's Goddard Space Flight Center in Maryland, will focus on plasma interactions with airless bodies on the moon and model the effects of radiation environments.

"The discoveries these teams make will be vital to our future exploration throughout the solar system with robots and humans," Lori Glaze, director of the Planetary Science Division in NASA's Science Mission Directorate, said in the statement.

The new SSERVI teams were selected from a pool of more than 20 competitive research proposals. The eight teams join four other SSERVI teams that are working to better understand the Earth's moon, near-Earth asteroids and the near space environments of the Martian moons Phobos and Deimos, according to the statement.

"We are extremely pleased that the community responded with such high-quality proposals, and look forward to the many contributions new SSERVI team members will make in addressing NASA's science and exploration goals," Greg Schmidt, the institute's director at NASA's Ames Research Center, said in the statement.