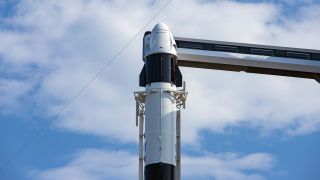 SpaceX's Crew Dragon capsule sits ready for launch atop a Falcon 9 rocket on Launch Complex 39A at NASA's Kennedy Space Center in Florida. On Wednesday (May 27), two NASA astronauts will launch to the International Space Station for the first crewed test flight of a Crew Dragon spacecraft. The Crew Dragon and Falcon 9 rocket reached the launch site on Thursday (May 21).
(Image: © SpaceX)

This week, astronauts will take off from American soil for the first time since 2011, riding aboard a SpaceX capsule in a historic test flight to the International Space Station.

On Wednesday (May 27) at 4:33 p.m. EDT (2033 GMT), veteran NASA astronauts Bob Behnken and Doug Hurley will launch as co-commanders on SpaceX's Crew Dragon vehicle, which will lift off on a Falcon 9 rocket from NASA's Kennedy Space Center in Florida. The mission, known as Demo-2, will fly the astronauts to the International Space Station. They are scheduled to arrive at the space station on May 28 and could stay in space anywhere from one to four months.

Demo-2 will be the first crewed launch to orbit from American soil since NASA's shuttle program ended in 2011. In fact, Hurley was on the crew for both that final shuttle mission (STS-135) and the upcoming mission.

The astronauts arrived at Kennedy Space Center on May 20, a week ahead of the launch, and have been preparing diligently for their ride to space.

"We are on the cusp of launching American astronauts on American rockets from American soil yet again," NASA Administrator Jim Bridenstine said May 20 after Hurley and Behnken arrived at Kennedy. "You really are a bright light for all of America right now. Thank you so much for all you've done and all you're about to do."

The launch, because of its historical significance, would normally draw enormous crowds to Kennedy to witness the rocket lifting off with Behnken and Hurley on board. However, Demo-2 isn't taking off under standard circumstances. It is, instead, lifting off in the midst of the coronavirus pandemic which has spurred travel restrictions, social distancing guidelines, factory closures and has led to most NASA employees working from home.

Because of concerns surrounding the novel coronavirus, Bridenstine has urged people to stay home for the launch and watch it virtually (the launch will be available to watch live online at NASA TV).

"We are asking people to join us in this launch, but to do so from home. We're asking people not to travel to the Kennedy Space Center," he said in a recent video conference. In fact, Kennedy will be closed to the public until Thursday (May 28), the day after the launch is scheduled to take place.

While SpaceX and NASA have given the go-ahead for Crew Dragon's launch, there is still some work to complete. On Monday (May 25), the Demo-2 mission team will meet to discuss the Falcon 9 rocket and Crew Dragon capsule in a final launch readiness review to ensure all is well before launch.

And then there's the weather. Current forecasts predict a 40% of good conditions for launch on May 27, according to the U.S. Air Force 45th Weather Squadron. If NASA and SpaceX can't launch this week, they'll have to wait until May 30 for the next attempt.