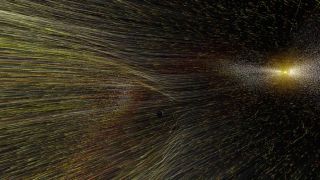 To better understand the fundamental nature of space, NASA selected two proposals for a mission that would tag along with the Interstellar Mapping and Acceleration Probe that launches in 2024. Shown here is a visualization of the solar wind.
(Image: © NASA)

While outer space might seem empty, in reality, it's a changing environment that responds to everything from gas flowing out of planetary atmospheres to radiation streaming from the sun and other stars.

To better understand the fundamental nature of space, NASA wants to send a mission to tag along with the Interstellar Mapping and Acceleration Probe that is scheduled to launch in October 2024. The agency recently announced two proposals, worth up to $400,000 each, that will compete to launch with this mission. The selected mission will receive up to $75 million to prepare for a journey to a Lagrangian point, a stable gravitational location between Earth and the sun.

Related: Solar Quiz: How Well Do You Know Our Sun?

These are the two proposals:

This mission would build on our knowledge of where the heliosphere — or the sun's sphere of influence, particularly regarding the solar wind particles which steam from its surface — brushes up against interstellar space. Only two spacecraft have ever ventured into the interstellar medium: Voyager 1 and Voyager 2. As these craft continue to study the sun from far away, the Parker Solar Probe, Interstellar Boundary Explorer, IMAP and SIHLA would all work together to look at the heliosphere from closer up.

"SIHLA would map the entire sky to determine the shape and underlying mechanisms of the boundary between the heliosphere, the area of our sun's magnetic influence, and the interstellar medium, a boundary known as the heliopause," NASA said in a statement. "The observations would gather far-ultraviolet light emitted from hydrogen atoms. This wavelength is key for examining many astrophysical phenomena, including planetary atmospheres and comets, because so much of the universe is composed of hydrogen."

The principal investigator for SIHLA is Larry Paxton, who serves as the head of the geospace and Earth science group at the Johns Hopkins University Applied Physics Laboratory in Maryland.

GLIDE would look at Earth's tenuous upper atmosphere, also known as the exosphere, by looking at the ultraviolet light that hydrogen emits. The investigators are particularly interested in learning how "space weather," or variability from the sun, can interfere with radio communications in space. Since spacecraft generally use radio to communicate with Earth, predicting interference is vital to keeping science flowing across the solar system.

"The proposed mission would fill an existing measurement gap, as only a handful of such images previously have been made from outside the exosphere," NASA said in the same statement. "The mission would gather observations at a high rate, with a view of the entire exosphere, ensuring a truly global and comprehensive set of data."

The principal investigator for GLIDE is Lara Waldrop, an assistant professor of electrical and computer engineering at the University of Illinois, Champaign-Urbana.