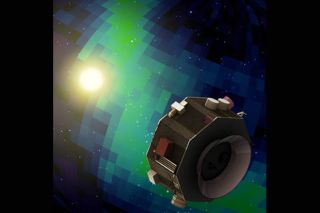 An artist's illustration of NASA's Interstellar Mapping and Acceleration Probe, a mission to study the interaction of the sun's solar wind with the winds of other stars. It will launch in 2024.
(Image: © NASA)

NASA will launch a new mission in 2024 to help scientists better understand the bubble that surrounds the solar system, agency officials said.

This huge bubble, which known as the heliosphere, is created by the sun; it consists of charged solar particles and solar magnetic fields. The heliosphere helps protect Earth and other solar system bodies from space radiation, blocking some highly energetic cosmic rays that originated in interstellar space.

But the heliosphere boundary is far from impenetrable. The new NASA mission, called the Interstellar Mapping and Acceleration Probe (IMAP), will collect and study fast-moving particles that manage to make it through. [Solar Quiz: How Well Do You Know Our Sun?]

"This boundary is where our sun does a great deal to protect us. IMAP is critical to broadening our understanding of how this 'cosmic filter' works," Dennis Andrucyk, deputy associate administrator for NASA’s Science Mission Directorate in Washington, said in a statement Friday (June 1). "The implications of this research could reach well beyond the consideration of Earthly impacts as we look to send humans into deep space."

IMAP was chosen from a stable of candidate proposals submitted late last year, NASA officials said. The probe will launch to the Earth-sun Lagrange Point 1, a gravitationally stable spot in space about 930,000 miles (1.5 million kilometers) sunward from our planet.

IMAP will use 10 onboard science instruments to characterize the particles streaking through that neighborhood. Such work should shed light on the interaction between the interstellar medium and the solar wind — the stream of charged particles flowing constantly from the sun — and help researchers better understand how cosmic rays are accelerated inside the heliosphere, among other things, NASA officials said.

The cost of the mission is capped at $492 million, not including the launch vehicle. IMAP's principal investigator is David McComas of Princeton University, and the mission will be managed by The Johns Hopkins University’s Applied Physics Laboratory in Laurel, Maryland.

IMAP is the fifth mission in NASA's Solar Terrestrial Probes program. The other four are the Thermosphere, Ionosphere, Mesosphere Energetics and Dynamics mission (TIMED), which launched in December 2001; Hinode, a collaboration with the Japan Aerospace Exploration Agency that lifted off in September 2006; the Solar Terrestrial Relations Observatory (STEREO), a joint mission with the European Space Agency that launched in October 2006; and the Magnetospheric Multiscale mission, which launched in March 2015.