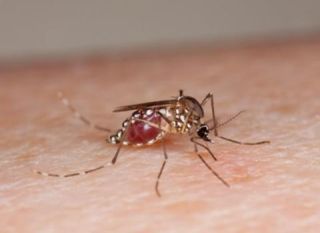 When the female Aedes aegypti mosquito feeds on the blood of humans, it may spread a variety of diseases.
(Image: © U.S. Department of Agriculture)

Mosquito-borne diseases are responsible for hundreds of thousands of deaths worldwide every year, according to the World Health Organization (WHO), which is why NASA has been working to help track outbreaks.

Now, the space agency is expanding such efforts by collaborating with foreign governments and the WHO, officials with NASA's Earth Sciences Division wrote in a June 27 blog post detailing the role NASA plays in helping to combat the spread of mosquito-borne diseases.

NASA is supporting the development of an early warning system in Myanmar that uses satellite data, for instance. Agency satellite observations are also being integrated into a regional-based statistical model to combat mosquito-borne disease in Peru.

The post outlines initiatives in several parts of the world funded by the Health and Air Quality Applications area of NASA Earth's Applied Science Program.

The satellte data reveal environmental changes, but that information isn't enough. For scientists to fully understand the spread of these diseases, researchers need population data, NASA officials wrote in the blog post. For instance, malaria symptoms may not appear until several weeks after a person is bitten by an infected mosquito. As such, if someone shows signs of malaria in one location, it doesn't mean that person became sick there.

Warm, wet regions make for ideal mosquito breeding grounds. Satellites can monitor changes in temperature, soil moisture and precipitation in such regions across the globe.

To make sure that preventive measures, like bed nets and indoor sprays, are used where the disease is actually contracted, Peruvian officials and NASA researchers draw on observations of the movement of people and precipitation gathered before an outbreak. That information feeds detailed statistical models such as one developed by researchers William Pan, of the Duke University Global Health Institute, and Ben Zaitchik, of the Johns Hopkins University Department of Earth and Planetary Sciences..

In Myanmar, a satellite-based malaria-forecasting program makes use of Landsat satellites that can identify various bodies of water, which may indicate mosquito breeding grounds. These data and other observations support the Myanmar Malaria Early Warning System, developed by Tatiana Loboda, an assistant professor in the University of Maryland Department of Geography. This system doesn't observe whole regions but instead focuses on changes to particular areas, considering population density, socioeconomic status and military conflict along with geographical changes.

Loboda's project incorporates satellite remote sensing with medical surveys and mosquito observations ''to explore the role of land cover and land use as indicators of both human presence and activity and mosquito habitat suitability'' that would allow for a ''dynamic monitoring'' of a region's risk potential to malaria, according to a project description published by the university's National Socio-Environmental Synthesis Center in Oct. 2018.

NASA's Health and Air Quality Applications programs also use satellite data to look at the effects of climate change on air quality and public health.