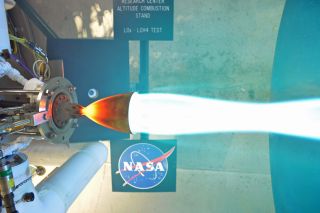 Driving past Cleveland Hopkins International Airport on Interstate 480 in Ohio, you might notice a giant NASA logo on a white airplane hangar at the southwest edge of the airfield. That's the biggest building at NASA's Glenn Research Center (GRC), where scientists and engineers have been developing technologies for flight for eight decades. The center currently employs over 3,000 people operating a world-class array of wind tunnels, vacuum chambers and other research and test equipment, according to the Center's website.

For the public, the Glenn Visitors Center is housed at Cleveland's Great Lakes Science Center. Exhibits there include artifacts from Ohio astronaut John Glenn's 1962 Project Mercury flight and the Apollo Command Module flown on the Skylab 3 mission in 1973.

Public tours of the research facilities are offered once a month from April through October. Participants must be U.S. citizens or permanent residents ages 10 and older, and reservations are required.

GRC has had four official names, according to a history of the center written by Robert S. Arrighi and published by NASA in 2016. The center began as the Aircraft Engine Research Laboratory (AERL), a department of the National Advisory Committee on Aeronautics (NACA), the predecessor of NASA. When World War II ended, the AERL was renamed the Lewis Flight Propulsion Research Laboratory, honoring George W. Lewis, who had been NACA's director of aeronautical research. When NACA became NASA in 1958, the laboratory became the NASA Lewis Research Center. Then the name changed again in 1999, when Ohio Sen. Mike DeWine proposed honoring his former Senate colleague Glenn, who was the first American to orbit Earth in 1962 and who made history again in 1998 at age 77 as the oldest person to enter space, this time on space shuttle mission STS-95.

In 1939, famed aviator Charles Lindbergh and other aircraft industry leaders urged government representatives to fund a facility to improve American aircraft engines so they could keep up with England and Germany as World War II began. NACA heeded the warning and selected the Cleveland airport as the site for the new Aircraft Engine Research Laboratory because of its long history hosting world-famous air races, its proximity to engine manufacturers and other industrial plants and its inland location, which was considered less vulnerable to enemy attack than a coastal site. The first buildings, constructed in 1942, included the hangar you can see from I-480 and buildings for engine testing and research on fuels and lubricants.

One of the most notable developments that came out of the Lewis center during the postwar period was the technique of using liquid hydrogen and liquid oxygen as rocket propellants. Though difficult to store and handle, liquid oxygen (which must be kept cold, at minus 299 degrees Fahrenheit, or minus 148 degrees Celsius) and the much colder liquid hydrogen (minus 423 F, or minus 253 C) could lift more payload per pound of liftoff weight than earlier propellants, and was later used to power the second and third stages of the Apollo Saturn V rocket and the Space Shuttle main engines.

Beginning in 1962, researchers at Lewis used their liquid hydrogen expertise in developing and testing the Centaur upper stage rocket. Stacked atop Titan and Atlas rockets, Centaur stages have been in use since 1963. The liquid hydrogen-powered stages have launched over 250 communications satellites, national security payloads, space observatories and planetary probes, including the Viking missions to Mars, the Pioneer and Voyager outer planet missions, the Cassini-Huygens Saturn mission and the Solar and Heliospheric Observatory.

Scientists at Lewis also looked beyond chemical rocket fuels. In 1964, the center managed the Space Electric Rocket Test (SERT-1) — the first in-space operation of an ion electric engine. Teams at Lewis developed the NSTAR (NASA Solar Electric Power Technology Application Readiness) thruster, which propelled the Deep Space 1 probe to asteroid Braille and Comet Borrelly in the 1990s. Another NSTAR engine took the Dawn spacecraft to asteroid Vesta and dwarf planet Ceres in the early 2000s. Today, ion propulsion work at GRC continues with NEXT (NASA Evolutionary Xenon Thruster), which is projected to be about three times as powerful as NSTAR. Glenn is also promoting its Annular Engine design, which offers higher thrust in a more compact structure than previous ion engines, for future applications such as sending humans to Mars.

Aircraft testing at Lewis goes back to 1944, when the AERL built its Icing Research Tunnel (IRT), which subjects models of airplane wings and engine inlets to cold winds laced with supercooled water droplets. Most anti-icing technology used on airplanes today exists because of research performed in this tunnel.

One of the more spectacular test programs took place in the 1950s, with a series of full-scale airplane crash tests (with no one aboard) at a World War II arsenal near Ravenna, Ohio. The goal of the program was to study methods of preventing fires after otherwise survivable crashes.

In NASA's early days, the Lewis center built the lower half of a test model of the Project Mercury space capsule for a mission called "Big Joe." On this 1959 flight the "boilerplate" test capsule, with no one aboard, was launched into space on an Atlas rocket and plunged back into the atmosphere at high speed to verify that its heat shield could protect an astronaut returning from an orbital mission.

In another role in Project Mercury, the center was home to an iconic training device for astronauts: the Multi-Axis Space Test Inertia Facility (MASTIF), also called the gimbal rig. Originally built to test the Mercury spacecraft's automatic attitude control system, it was modified to allow astronauts to practice controlling a tumbling spacecraft. An astronaut's couch, control stick and instruments were mounted inside a set of nested cages that could rotate in pitch, yaw and roll simultaneously. Test engineers would set the device in motion, and the astronaut would use the control stick to fire small gas jets to stop the tumbling.

Over the decades, the Glenn center has built up an array of world-class test facilities including:

Current research efforts at Glenn include:

In the early 1950s, in its search for more advanced means of propulsion, NACA decided to research the idea of a nuclear-powered airplane that might fly anywhere in the world without refueling. To test the technologies involved, the agency built its own nuclear reactor at Plum Brook Ordnance Works (where TNT had been manufactured during World War II) and put it under Lewis center management. The reactor operated from 1961 to 1973 and has since been decommissioned and demolished.

The nuclear airplane never came to fruition, but during the 1960s, Plum Brook worked on the Nuclear Engine for Rocket Vehicle Application, or NERVA. In this proposed engine, nuclear fuel would heat liquid hydrogen to be expelled at high speed through a rocket nozzle. Another Plum Brook project, the Space Nuclear Auxiliary Program (SNAP), developed nuclear-power sources that were used in instrument packages left on the moon by Apollo astronauts.

In the meantime, other test facilities had been built at Plum Brook. A vacuum chamber known as B-2 had enough room to accept a full-size rocket stage, and had exhaust pumps powerful enough to maintain a vacuum even while a rocket engine was firing inside.

Another Plum Brook facility, the Space Environments Complex, has the world's largest vacuum chamber, 100 feet (30.5 m) in diameter and 122 feet (37.2 m) high — big enough to hold a full-size spacecraft. Using a combination of radiators and cold panels, the chamber can create the same thermal stresses as interplanetary space. The vacuum chamber was used to test airbag-landing systems for the Mars Pathfinder spacecraft as well as components for the Mars landers Spirit and Opportunity.

Today, Plum Brook's testing capabilities are contributing to NASA's Artemis project to return astronauts to the moon. In December 2019, the Space Environments Complex received the Artemis I Orion spacecraft crew module and European-built service module for testing in the thermal vacuum chamber. Another test is planned to take advantage of the vacuum chamber's ability to block external radio waves, creating a radio-quiet environment. Orion's electronic systems will be turned on to find out if components interfere with each other via electromagnetic fields.

Earlier, the Orion spacecraft's ogive panels, which form a shell around the crew module to protect it from noise and vibration during ascent, were tested under simulated launch conditions in the Plum Brook Reverberant Acoustic Test Facility, located next to the vacuum chamber. This barn-size room, 47.5 feet by 37.5 feet by 57 feet (14.5 by 11.4 by 17.4 m) with concrete walls 6 feet (1.8 m) thick, is lined with precisely controlled horns that can produce sound levels up to 163 decibels. For comparison, the sound level from a jet airliner taking off is about 120 decibels.

After its first flight, the Orion crew module is scheduled to return to Plum Brook for further environmental testing, GRC News Chief Jan Wittry told Space.com in an email. Glenn is also working on the universal stage adapter and other fairings for future variants of the Space Launch System for Artemis, as well as the Power and Propulsion Element for the Gateway lunar orbiting platform, Witty said.